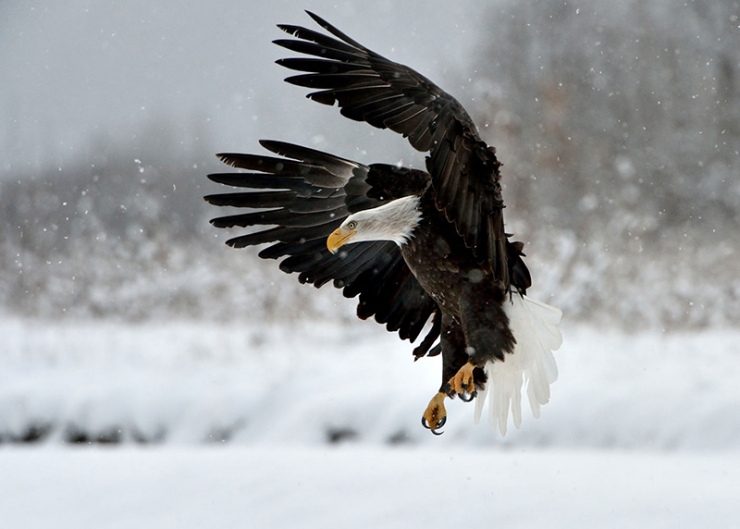 To coincide with our display of the Oxford Photographic Society‘s annual show, here Society member Ron Perkins recounts how he captured these great shots of the magnificent Bald Eagle.

Bald eagles, the national birds of the USA, are charismatic, powerful creatures. Young eagles are tawny brown but acquire their majestic black plumage, with white heads, after two years.

In early winter the Alaska Chilkat Bald Eagle Preserve attracts up to 3,000 eagles which pause on their seasonal migration to the south in order to feed on the salmon that swim up the river to spawn.

Having discovered this photo opportunity via the internet I easily recruited three Oxford Photographic Society members to travel to Alaska. The journey took two and a half days via Seattle and Juneau by air and on to the small town of Haines by an 80-mile ferry trip.  Haines is near the Pacific coast so although there was snowfall most days the daytime temperatures were about -5C.  Each day we drove 20 miles along the banks of the river to the best photographic locations to get our shots.

After spawning, the fish die in the shallows at the edges of the river. Then the eagles drag the dead salmon onto the snow-covered banks. The fish weigh up to 15 pounds so moving them is difficult; some adult eagles watch juvenile birds moving the salmon onto the riverbanks and then attack to drive away the juveniles.

Eagles always attack into the wind, so it is easy to plan and position yourself to capture these shots. And the combination of large numbers of eagles with frequent dramatic action is a powerful attraction for wildlife photographers.