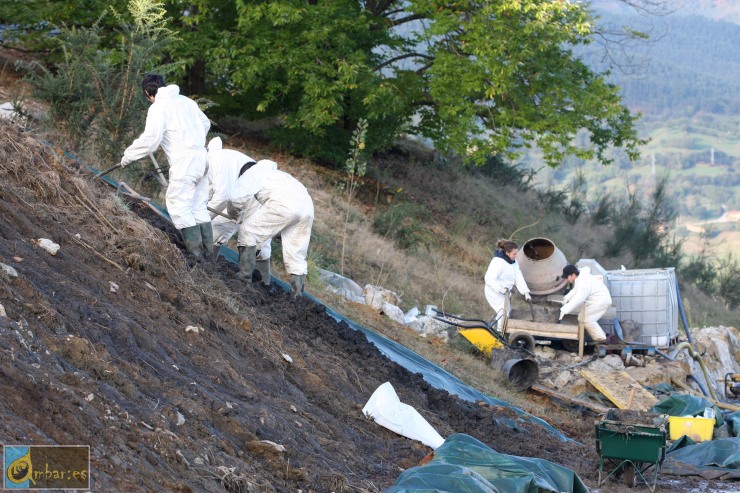 Amber, or fossilised plant resin, is a unique material to learn about the history of life on Earth. Its incredible preservation and ability to capture life “in action” are well known thanks to the Jurassic Park saga, but fewer people know where amber is found, what it looks like in the field, and how it is gathered.

Cretaceous amber, about 130 to 70 million years old, is the oldest amber that provides abundant fossils, specifically insects and spiders. Ecosystems drastically changed during this period due to global greenhouse conditions and the diversification of flowering plants, among other factors. Amber from that time has been discovered in Lebanon, Spain, France, Myanmar, eastern United States, Canada, and northern Russia.

My research team and I carry out regular amber excavations in northern Spain, working in teams of six to ten people. The outcrops that we excavate are often located next to roads and highways because amber is typically uncovered during roadworks. Excavations take place during the summer or fall to try and minimise the risk of rain, and we usually embark on one field trip each year.

The goal is to recover as much amber as possible – usually a few kilograms – from the muddy and sandy sediments. These materials were transported downstream tens of million of years ago by heavy rain and river swellings from the forests where the resin was produced, before being finally deposited in near-shore areas.

I find amber excavations quite romantic. In the field, amber has a dull appearance that makes it difficult to distinguish from rocks or woody remains. This is due to an opaque crust resulting from oxidation in the sediments and other processes.

This outer layer makes detecting potential fossils inside the amber highly unlikely while the excavation is ongoing. So, in the field we just gather as many amber pieces as possible, and hope for the best.

Only when amber is polished – or shows broken surfaces – does its distinct yellowish to reddish shine emerge, and any possible fossils within become evident. Some ambers are highly fossiliferous, while others are very poor in fossils.

Amber can be gathered by hand using regular tools such as hammers. However, the most efficient method to extract amber from soft sediments is with concrete mixers! This rather unsophisticated piece of equipment provides the best way to recover medium quantities of amber in the field.

We charge water and amber-bearing sediments into the mixer, and after stirring for a while amber floats to the top because it is less dense than muddy water. Then, the surface of the water containing the amber is poured into sieves, which separates even the tiniest pieces.

After fieldwork, many hours will be spent looking for fossils within the amber and preparing them. Gathering raw amber is just the first part of a process in unearthing the secrets held within – fragments of encapsulated time.