Tests of time: Foraminifera and Radiolarians in science, art and 3D 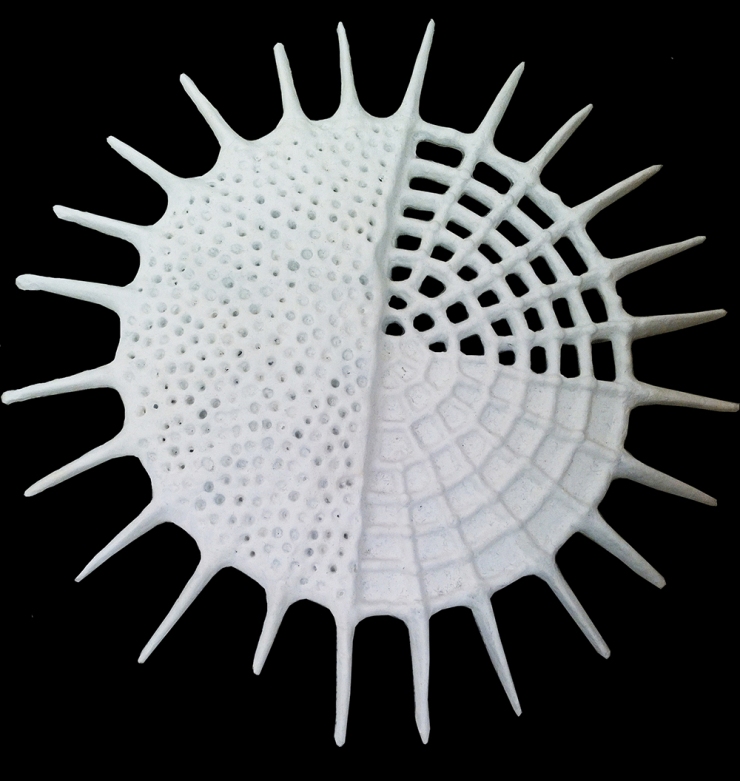 Doctoral researcher Elaine Charwat is exploring the value and meaning of models and casts in the Museum’s collections as part of her PhD. She has recently been studying some fabulous models that help to visualise and understand some of the very, very smallest of specimens…

The first time I encountered a Radiolarian was in a book – Ernst Haeckel’s (1834-1919) weird and wonderful Kunstformen der Natur (Art Forms in Nature, 1899-1904). It took comparative morphology – comparing the shapes of organisms – to new giddy heights, scientifically, philosophically and artistically. I felt that giddiness when looking at page after page crammed with crustaceans, orchids, hummingbirds, moths and even bat faces, all exquisitely arranged to celebrate their symmetries, the evolution and kinship of their shapes and forms. It also made visible organisms that are normally all but invisible.

Foraminifera and Radiolarians are microscopic sea-dwelling organisms. Species may be found as fossils dating from Cambrian times, ca. 500 million years ago, right up to living specimens today.

To Haeckel, they were living proof of Darwin’s theory of evolution, and for his own belief that morphology was the key to understand the actual processes of evolution, catching it in the act. However, these organisms had two big disadvantages – their unwieldy taxonomy, or the way they are classified, and their minute size: they were difficult to examine and display.

Through his illustrations, Haeckel widely popularized them – triggering a Victorian craze for microscopes and microorganisms, as well as influencing art nouveau art and architecture. But there were limits to what an illustration could communicate. Models stepped in, representing these organisms in ways illustrations could not.

One defining feature of Radiolarians and Foraminifera is their shells – called “tests”. Variations in shapes of the tests not only indicate that they are different species, but also, excitingly, provide clues about space and time. The tests of Neogloboquadrina pachyderma, for instance, record ocean temperature over geological timescales – their shells coil to the left when water temperatures are relatively cold, and to the right when it is warmer. The potential for research into climate change is obvious. Foraminifera are also important “signature fossils”, helping geologists to determine geological strata.

You really need to see them in glorious 3D to appreciate these tests across geological time, to understand their complex, beautiful shapes. And I felt a similar twang of excitement to my first encounter with them through Haeckel when discovering these extraordinary models here in the Museum as part of my PhD research.

Václav Frič (1839-1916) was a natural history dealer based in Prague. He developed a series of 100 plaster of Paris models of Foraminifera (1861), as well as the stunning papier-maché models of Radiolaria (listed in his catalogue of 1878). He worked closely with Ernst Haeckel.

The Frič models oscillate between visible and invisible, illustration and model, art and science, philosophy and theory. They bear witness to a key period in the history of science when they were used to give tangible shape and proof to Charles Darwin’s poignant phrase:  “[…] from so simple a beginning endless forms most beautiful and most wonderful have been, and are being, evolved.”

Through the models we can “grasp” microorganisms that have been around for over 500 million years; organisms that truly have stood the tests of time.