Arocatus longiceps is in the insect order Hemiptera, commonly called ‘true bugs’ and is part of the family called Lygaeidae often referred to as seed bugs, due to their feeding behaviour on plant seeds. This species is not native to the UK and was first discovered in Britain during 2007 on plane trees in the grounds of the Natural History Museum, London. This appearance made the bug quite famous; it even featured on the BBC News in 2008 as a new, apparently unidentifiable species.

Originally this species was determined as Arocatus roselii, however specialist researchers in seed bugs were consulted and the bug was finally identified as Arocatus longiceps an eastern Mediterranean species which has been spreading across Europe over the last few decades.

The species has mainly been recorded in the London area; but on the 30th November 2012 two specimens were found in the basement rooms at the Museum. This is a new record for Oxfordshire (Flanagan & Ryan, personal communication) and is probably the most Northerly record so far. 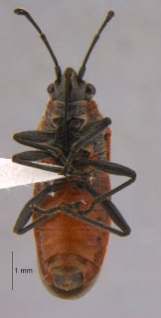 This bug is commonly found across Europe, and in October Amoret saw quite a few during a visit to Prague. The host plant is the plane tree; when the specimens were found in the museum, it prompted us to see whether there were more. As the photos below show, upon searching the plane trees outside the museum, we found an abundance of this bug.