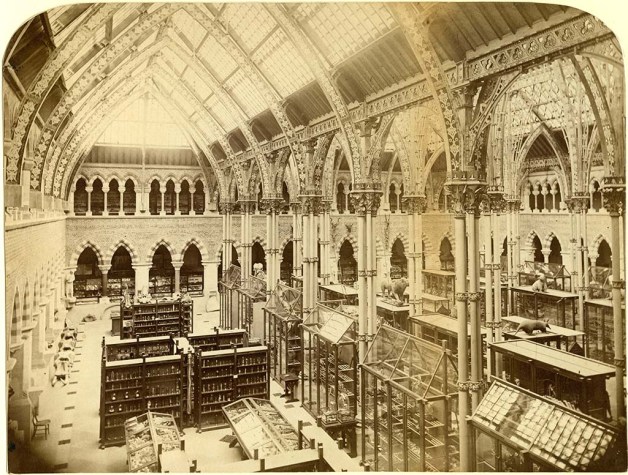 With the view from the gallery looking quite different these days, I was inspired to pull out some historic photographs from the archive of the roof’s original construction. Hoping for a glimpse of what to expect once it’s returned to its original glory, I also discovered some interesting facts about the architectural feats required to raise the roof the first time around.

The Museum was designed by the famous Irish architectural team, Deane and Woodward, which won the contract through a contest held by the Museum Delegates in 1854 (the Museum opened in 1860). One of the few stipulations of the contest was that the design had to feature a glass and iron roof to cover the court, and that the Museum had to be built for less than £30,000.

The design of the roof was quite innovative for the time, but the budget for construction was tight: originally £5,216. However, Skidmore, the iron-worker employed to execute the building of the roof supports, proposed that it could be done for much less if wrought iron, a cheaper and more malleable metal than cast iron, was used instead.

In fact, a further £2,000 was needed to complete this magnificent and heavy piece of construction because of this miscalculation on Skidmore’s part: the stronger cast iron was indeed needed to construct the load bearing pillars that held the glass roof safely in place. Wrought iron was still used for some of the work and, being more malleable, it proved the perfect choice for the intricate detailing that was planned for the pillars.

As Skidmore himself stated, it “held out the possibility of uniting artistic iron-work with the present tubular construction, and a prospect of a new feature in the application of iron to Gothic architecture.”

And so it was. More than 150 years later the roof remains visually impressive, even if it is a little leaky around the glass work. The picture below shows the current preparations for repairs that will restore the roof to its original splendour, ready for the Museum’s reopening in 2014.

One response to “(Reading) Up on the roof”