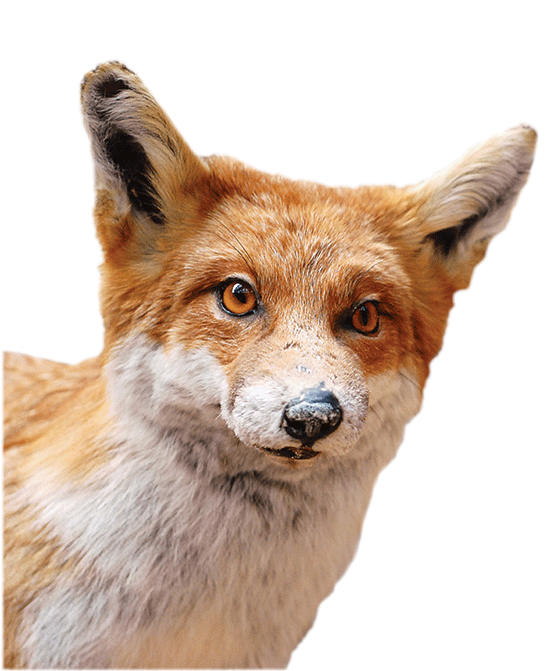 This week’s What’s on the van? comes from Malgosia Nowak-Kemp, Collections Manager in the Museum’s Zoological Collections.

The Red Fox, scientific name Vulpes vulpes, is a member of the order Carnivora.  Nowadays you can see foxes not only in the wild, but also in towns and cities. Resourceful, cunning, agile, with an ability to climb, they use varied sources of food to sustain them and their families.

They are unusual in having a golden or amber colour eye instead of green like cats, or brown like most other mammals. Their fur varies from yellowish to reddish with the rump often showing white-tipped hairs. The lower parts of the legs and the back of the ears are usually black.

They are highly vocal with barks, howls or yaps and other distinctive sounds with which they communicate between each other. Foxes breed once a year, and live in family groups consisting of a male (dog), female (vixen) and their cubs, and only occasionally, with one or two non-adult females from previous  litters.  Their cubs are born blind after about 53 days gestation, and open their eyes after 10 to 14 days.The males take an active part in caring for the family, by bringing food for the cubs and their mother. They mostly hunt at night for small mammals like voles and rabbits, but also scavenge and explore the contents of dustbins for anything to eat. In summer they would add beetles, and in the autumn, fruit to their diet.

Foxes moult once a year, in the early summer, and during the late summer and autumn months they grow additional hairs so the fur becomes thicker in preparation for the low temperatures of winter. Foxes rarely live longer than 8 years.