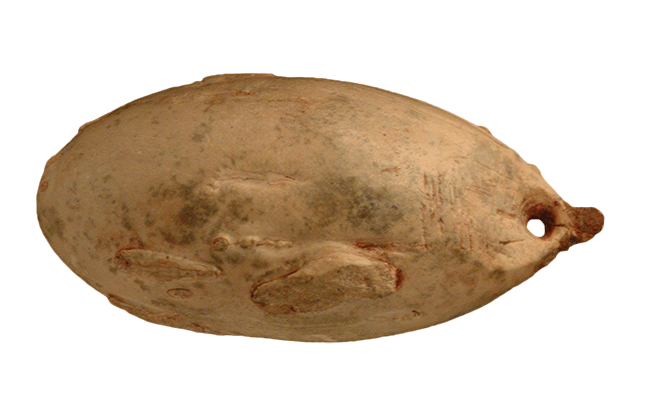 This week’s What’s on the van? comes from Paul Jeffery, the Museum’s Assistant Curator of Geology.

This curious object lies at the intersection of many different threads of thought and belief.  It was discovered in 1823 by pioneering British geologist and palaeontologist, William Buckland in a cave on the Gower Peninsula, South Wales.

Found along with other ornamental items, it formed part of the grave goods of a slender youth whose body had been painstakingly daubed in red ochre during a burial ceremony.  Buckland took the remains to be those of a Romano-British witch or courtesan, a notion fostered by his religious beliefs, which supposed the World was created by divine forces a few thousand years ago.

Later studies have shown the remains to be male, not female, and have utilised the slow but imperturbable decay of radioactive isotopes naturally present in the environment to prove that the burial dates from the Late Palaeolithic, around 33,000 years ago.  This makes the skeleton the oldest anatomically modern human found in the British Isles, as well as the oldest ceremonial inhumation in western Europe.

Late Palaeolithic art is extremely rare, especially in the British Isles, which lay on the margins of both the culture and often of habitability. Items such as the Paviland pendant illuminate the contemporary society, showing it could support both creativity and belief in a significance to the body after death, suggesting a culturally rich life rather than a mere primitive struggle for survival.

The object itself is exceptionally curious: it is mammoth ivory, its odd shape is largely natural– only the top is carved, providing a hole through which a thread could be passed so the pendant might be worn.

Mammoths are extinct relatives of elephants, and like them it is probable that males would engage in bouts of fighting to establish herd dominance.  During fights, tusks can be broken and if the break is within soft tissue, infection may take-hold.  If it persists, a tumour can form in the pulp from which the tusk grows.  The Paviland pendant is a unique example of such a tumour, as proved by the residue of the dismantled tusk from which it came, later found nearby.