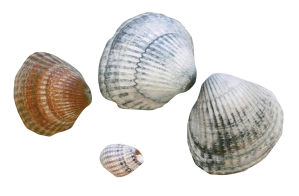 This week’s What’s on the van? comes from Sammy De Grave, assistant curator of the Museum’s Zoological Collection.

The Common Cockle, or Cerastroderma edule to give it its scientific name, is a widely distributed marine bivalve (shellfish), distributed from Norway southwards to West Africa, including the Mediterranean. It is one of the most abundant species in tidal flats and estuaries and supports extensive fisheries across its distribution. Aside from human consumption, the species is also very important in the marine food chain, with significant numbers of shore birds feeding on them, as well as fish and crustaceans. Due to the high demand as food, the species is now cultured in various countries.

Cockle shell ridges imprinted into clay pottery adorn a distinctive type of Neolithic pottery, associated with maritime cultures which colonised the peri-Mediterranean around 6,000-5,500 BC, highlighting an early use of the shell (probably after cooking and eating them).