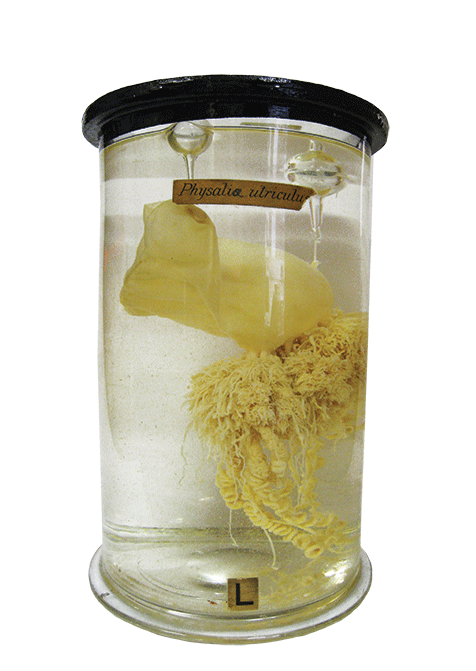 This week’s What’s on the van? comes from Kate Pocklington. Kate was the Museum’s Zoology Conservator, before moving to Singapore to work at the Raffles Museum of Biodiversity Research.

Physalia physalis is commonly known as Portuguese Man-of-War or in Australia, Blue Bottle. Despite often being labelled as jellyfish, physalids are actually siphonophores, which are colonies of many morphologically different individuals attached to each other and working together as a single entity. Physalia captures prey using venomous cells, which shoot out stinging barbs when disturbed.

They appear translucent blue when alive, but unfortunately due to death and method of preservation this one has lost its brilliant colour. I value this specimen because of its preparation.

Great care would have been taken to collect and preserve it as, even when dead, physalids remain venomous. The techniques of preservation used here help to display the natural form. This has been done using glass floats attached to the pneumatophore (the individual polyp at the top, a gas filled ‘balloon’) which replicates the natural position of the specimen in the sea. This also helps to show the length of the tentacles.

Without fluid preservation it would be almost impossible to use invertebrates such as this for educational purposes. This method of preservation captures not only the specimen but the development of techniques used over many years incorporating scientific and educational values together. This specimen is just one of approximately 25,000 jars of fluid preserved specimens in the Museum’s collections.

This piece is taken from the Museum’s 2010 exhibition A Few of our Favourite Things.