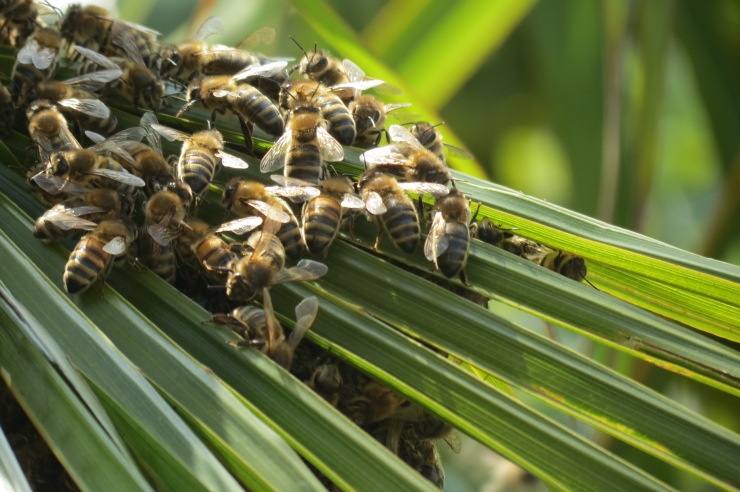 One of the most popular spots in the Museum is the live beehive tucked away upstairs. Even when the Museum seems quiet, you’ll find plenty of visitors huddled around the glass, watching the honey bees coming, going, dancing and buzzing. But if you head up to the hive today, you will notice that there’s a lot less buzzing than usual… some of the bees have abandoned us!

Last week I was sitting at my desk in the education office when Zoë Simmons from our Life Collections popped her head round the door and calmly announced, “The bees are swarming”. I must admit that I had a brief vision of angry bees chasing visitors through the Museum, or swirling cartoon-like across the lawn! But the swarm was actually a large throbbing bundle of fairly calm honey bees clustered on one of the plants outside. But why did hundreds of bees suddenly decide to leave their cosy hive and break out into the unknown?

Zoë, who’s been involved in caring for the beehive for several years explains what happened:

After a difficult beginning to the year, the observation beehive was left without a queen bee in residence. This may sound disastrous, but bees are both resourceful and well organised, and the worker bees left in the hive immediately started to feed up a number of the youngest larvae on royal jelly, to create themselves a new queen. There are three large queen cells to be spotted in the hive at the moment and we believe that one of the young queens must have emerged on the morning of the swarm. The first thing she would have done is assess the hive; it appears that it wasn’t to her majesty’s liking, as the next thing she then did was leave, taking about half of the workers bees (mostly the older ones) with her.

The area around the swarm was fenced off, but it attracted a lot of attention as people passed by on their way in and out of the Museum. Zoë Simmons and the Life collections team decided the swarm needed a new home:

Staff at the Museum were able to get in touch with a local bee-keeper, who rushed to the Museum to collect the swarm up. The bees have now been gathered up and taken to live in a custom built hive somewhere on the edge of Port Meadow, where we hope that they will thrive and bee happy.

4 thoughts on “Havoc in the hive”