One of the tasks of a University museum – and indeed all museums – is to communicate often complex and detailed academic knowledge to a non-specialist audience. There are lots of creative ways for us to go about this, from capturing children’s interest in nature and natural history through well-structured schools and family sessions, to the careful interpretation of specimens and subjects in exhibition displays. Another route is to collaborate with artists who can respond to and present the collections in a different manner.

We’ve been running a collaboration like this in our Life Collections since 2011, working with local artist Jane King. Jane has more recently teamed up with another Oxford-based artist, Neil Mabbs, and together they have formed Pale Blue Dot, a not-for-profit arts-science partnership that aims to raise public awareness about environmental and social concerns through exhibitions, publications and events.

The first of these events is a multimedia installation called Lost & Found, running at the North Wall Arts Centre in Oxford from 28 May – 13 June. For this project Jane and Neil have worked with head of Life Collections Darren Mann and Amoret Spooner in the Museum, along with Professor Dave Goulson at the University of Sussex.

The Lost & Found exhibition asks whether consumerism is causing the extinction of millions of the planet’s species and the ecosystem services they provide. It uses a variety of material, including mixed media prints, photography, film and projection, 3D display, live planting, textiles, and artists’ books.

Artwork is supported by ‘Evidence Tables’ containing specimens from the Museum’s collections, as well as the results of the latest scientific research in the area. It is part of an effort by Pale Blue Dot to communicate complex scientific messages to a wider public audience.

Amoret explains the idea behind the project:

It focuses on the pollinators and decomposers that provide humans with some of the most tangible benefits in terms of ecosystem services.

The pollinators are a group of almost 500 species of UK bees, hoverflies, butterflies and moths. Specimens from the collection are being displayed in cases to represent many of the species, as well as being utilised as source material for the artwork.

Pale Blue Dot’s Lost & Found aims to raise awareness of some of the research carried out by scientists here at the Museum that visitors wouldn’t normally hear about.

Darren’s photographs of dung beetles and his research papers on the role of dung beetles in the environment are featured. Dung beetles’ daily task of dung recycling helps increase crop yields by speeding up the release of nutrients into the soil, as well as reducing the spread of farm animal parasites and infections caused by biting insects. One of the pieces made by Jane is an artist’s book – Beetle Book – which highlights this vital ecosystem service that beetles provide to humans.

Many of our beetle, bee, moth and butterfly specimens will be on display in the Lost & Found exhibition at the North Wall, so head over there from 28 May to check it all out. 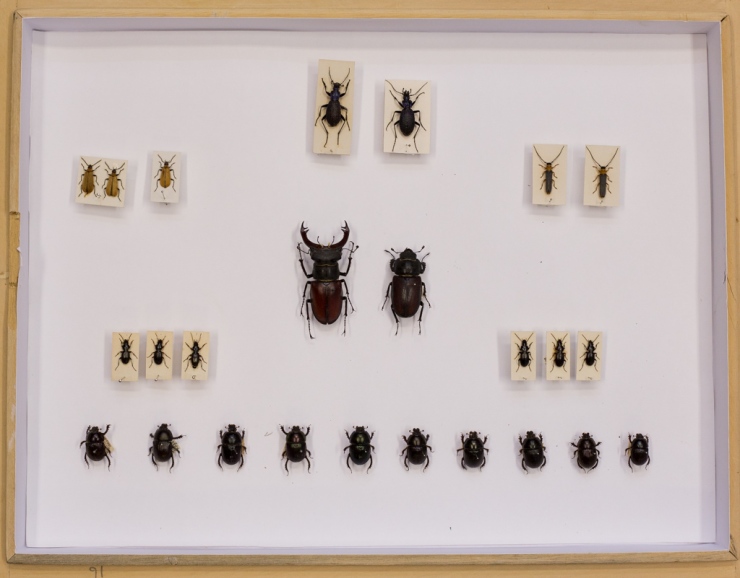 One thought on “Lost & Found”