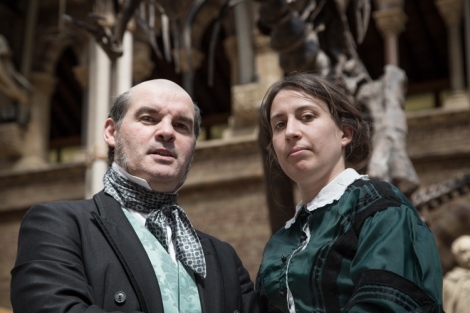 Who created the theory of evolution? Why, Mr Darwin of course! Ah, if only the history of science were so neat.

Charles Darwin’s 1859 work, On the Origin of Species, is considered the stake in the ground for intellectual ownership of the theory of evolution by natural selection. But as a play making its UK premiere this week shows, the picture is not so clear-cut.

Darwin is evolution’s most famous proponent, but when pressed on the subject some people may also name Alfred Russel Wallace, Darwin’s contemporary and a co-conceiver of the theory of natural selection. Others claim the idea had earlier antecedents.

And so the muddle of priority – and its effects on those involved – is played out in Trumpery, a play by American playwright and West Wing script writer Peter Parnell.

Trumpery is produced by Oxford’s Eleven One Theatre and directed by Helen Taylor, who is keen to note that the script is a dramatisation of events, not a historical record.

The central story of the play is Darwin’s decision to publish the Origin after sitting on it for so many years, when he hears that Wallace has come up with the theory independently. The play is a fascinating exploration of Darwin’s feelings of guilt – not just about Wallace and the issue of priority, but about the impact of his discoveries on religious belief.

As well as holding many specimens collected by Darwin and Wallace in the collections, the Museum was also the site of the famous Great Debate in 1860 between Thomas Henry Huxley, championing Darwin’s ideas, and Samuel Wilberforce, Bishop of Oxford, who defended the biblical account of creation.

So it was a treat to have the cast in full costume parading around the Museum yesterday, regarding the statue of Darwin in the main court (and lamenting the absence of Wallace), checking out the specimens and doing a bit of promo at the same time.

Trumpery opens at the Simpkins Lee Theatre at Lady Margaret Hall in Oxford on Tuesday 10 June with evening performances each day, plus a matinée on Saturday 14 June. It is part of a science season created by Eleven One Theatre in conjunction with the University of Oxford’s Mathematical Institute. Tickets are available via the Eleven One Theatre website.

The first of the three plays in the season was Émilie: La Marquise du Châtelet Defends Her Life Tonight, which ran in February. After Trumpery, the group will stage Copenhagen, Michael Frayn’s tightly-constructed play about atomic scientists Niels Bohr and Werner Heisenberg. Of the season Helen says:

As a non-scientist, my ‘way in’ to these plays is through the human stories: there is so much drama to be found in the lives of people who struggled to break new ground, to push themselves to their intellectual limits, to deal with the constraints placed on them by the beliefs and politics of the times, and with the impact of their work on their personal lives.