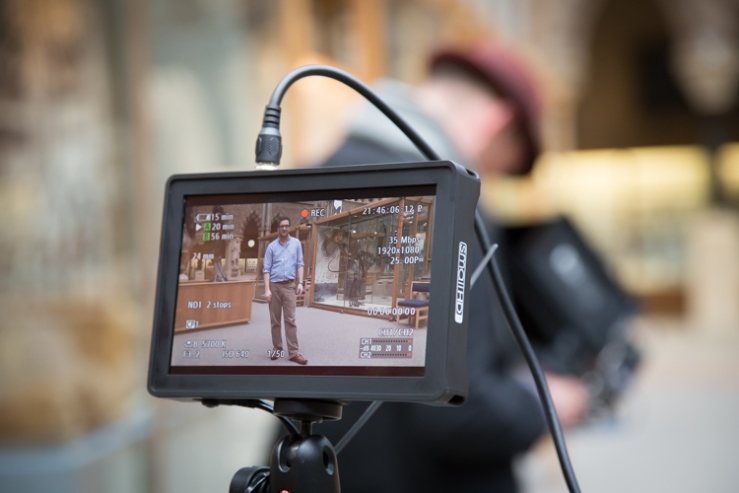 Earlier this year we had the pleasure of hosting the BBC iWonder team and evolutionary biologist and presenter Ben Garrod for a filming session all about the evolution of birds. BBC iWonder is a growing series of short but rich guides to subjects as wide-ranging as salt in your diet, the World Cup, and the holocaust, each designed to pique people’s interest and curiosity.

Ben’s guide is titled ‘Do Dinosaurs Still Live Among Us?’. This is a good question indeed and the answer is (sort of) ‘yes’. You can find out a lot more in the guide itself, which has just been launched here and features some lovely footage of the Museum and our cast of the famous Archaeopteryx fossil, the first found to show the traces of feathers on a dinosaur.

Needless to say we were very pleased when the iWonder team contacted us about their idea to look at the evolution of birds from dinosaurs using specimens in the Museum. The guide’s producer and director Ben Aviss explains how it came about:

We brainstorm ideas for new content for the guides and one of those was to look at dinosaurs, but what question might we ask? The idea of dinosaurs and birds sharing a common ancestry is something that not everyone may know about so we decided to look at that.

Ben Aviss had already seen the Museum on Ben Garrod’s BBC4 series Secrets of Bones and thought it looked great. “The more we chatted about the things we might want access to, the more we realised you offered everything we needed,” he adds.

It was a third return to the Museum for Ben Garrod who, as well as filming sequences for Secrets of Bones, had also run our Capybara Construction special event earlier in the year. He explains the appeal of returning for the iWonder guide:

This iWonder guide represents a new and fun way to retell a key moment in evolutionary history – the transition from dinosaurs into modern birds and I’m pleased with the final result. It’s informative and interesting but more than that, it looks good and that is in no small part down to the setting in which we filmed.

I keep coming back again and again because I genuinely love the Museum. The collection is laid out in a way that gives the visitor lots of time and space to explore and the specimens themselves are great – I’m still finding new things every time I visit.

There are plans for further iWonder guides that go richer and deeper, with greater interactivity and content. Let’s hope the collections – and Ben’s enthusiasm – brings the team back to tell another story here soon.