Find a dark corner of the museum, step behind a velvet rope and climb a narrow spiral staircase, and you reach a forgotten spot that is little more than a landing. But before you continue your journey and enter the next room, pause and look at the walls. 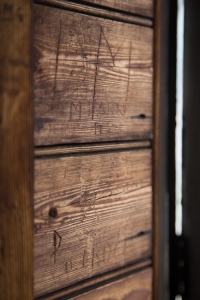 This little room behind the scenes in the museum is entirely wood panelled and seems to have become a spot to make your mark. Covering the walls, the door and even the ceiling are names and dates scratched into or scribbled onto the wood. The dates go as far back as 1920. Names, initials and numbers from the last 10 decades now overlap to create a textured collage.

It’s unclear how this tradition started, or why it seems to have been tolerated by the museum for so long, but it seems that hundreds of people who have spent time here wanted to leave a permanent reminder of their presence.

Some graffiti artists returned to admire their work and add to the collection many years later. Kevin Titcomb’s name is one of the larger in the room and he first made his mark 1978.

But look up to the ceiling and you’ll see his name appears again, with the date 1998. It looks like this time he’d run out of space on the walls and resorted to the ceiling – his handwriting suggests it’s a lot harder to write with your hand above your head!

The most recent addition was made in 2013, the year the museum closed for a roof renovation. You may remember we found some pretty significant graffiti back then too, as documented on our blog. Maybe the 2013 scribbler was inspired by this and wanted their name to be seen in 150 years time. 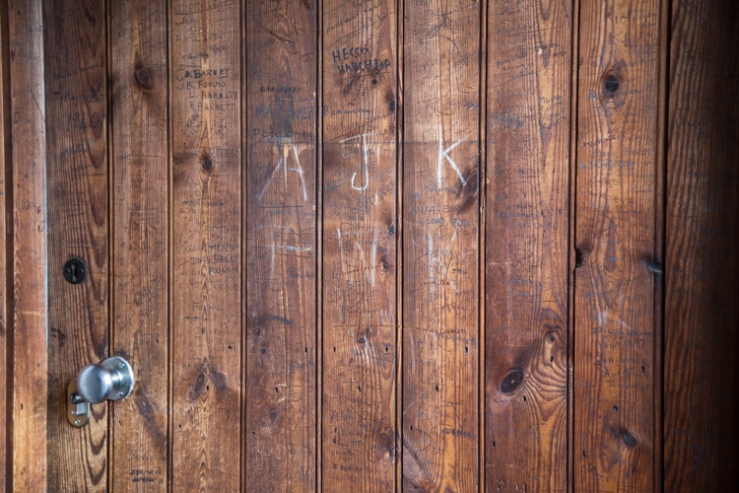 I was surprised that, after a good while searching the scribbles, I didn’t see any names that I recognised from current staff or museum legend. So who are these people who wrote on the walls? Staff using an alter ego? Visitors who snook behind the scenes and wanted to mark their bravery? Whoever they were, standing on that tiny landing surrounded by names, the graffiti certainly creates a feeling of history and a connection with the people who’ve been here before.