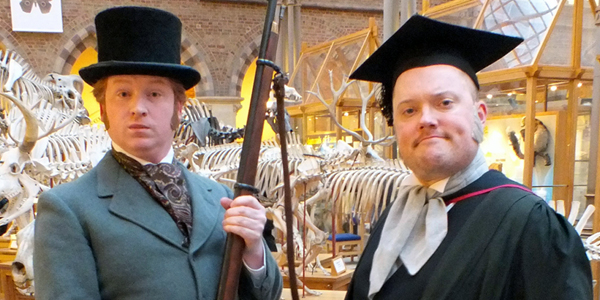 I’ve been to see the dinosaurs at the Pitt Rivers Museum!

It’s a common exclamation, but alas, there are no dinos in the Pitt Rivers, nor totem poles in the Museum of Natural History. Rather, there are two museums with a shared front door, and a fair amount of confusion.

To address this perpetual museum muddle we present a short play, Welcome to My Museum, where the Victorian founders of each institution come to life to discuss ‘two marvellous museums under one roof’.

A small grant from the Oxford University Museums Partnership allowed a collaboration between us, the Pitt Rivers Museum, Pegasus Theatre, and Film Oxford to produce two versions of the play – one for public performance and another for a film adaptation, which is the one you can watch below.

Working with Pegasus Theatre, Rachel Barnett scripted an imagined conversation between the founders of the two museums, Henry Acland and General Augustus Henry Lane-Fox Pitt Rivers. Pegasus helped to source actors and costumes and even a prop-maker for Pitt Rivers’s fine pufferfish helmet.

Film Oxford spent several late nights with a very patient rent-a-crowd, immortalising their adaptation of the play on film. The public performance was well attended, with over 250 visitors dropping in to watch General Pitt Rivers rudely interrupt Henry Acland’s speech welcoming visitors to his museum. Pitt Rivers rightly points out that there must be two museums as the building has two gift shops and even two differently-branded pencil sharpeners for sale in them – ‘scientifically incontrovertible’ proof!

So if you think that you have ever been to the Pitt Rivers Museum to see the dinosaurs, or the Museum of Natural History to look at the totem-pole, watch the film below and you will discover that our building is actually ‘two sublime museums under one roof’.

One thought on “‘Welcome to My Museum’”