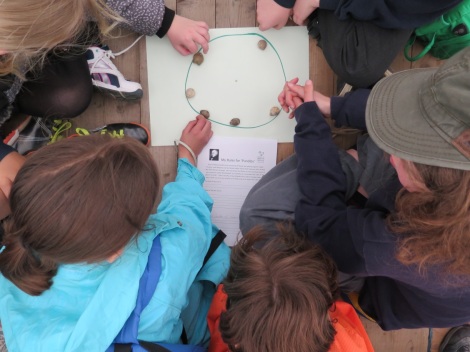 Glowing from the success of our ‘Goes to Town’ and ‘Goes for a Pint’ events, which helped us win this year’s Museums and Heritage Award for best marketing campaign, we decided to ‘Go to the Festival’: the Lyme Regis Fossil Festival to be precise. Thousands of fossil collectors and holiday makers came to a marquee on the beach to discover more about fossils and enjoy all sorts of activities led by museums, universities, societies and conservation groups.

This year marked the 200th anniversary of the very first geological map of Britain, made by geologist William ‘Strata’ Smith. As we hold the largest archive of his maps and papers, we were delighted to come and exhibit at the festival.

We brought with us some beautiful old specimens and archives from our collections, and let everyone enjoy and even play with real fossils. Play? Well, William Smith grew up in the Oxfordshire village of Churchill and used to play a game he called ‘pundibs’ using fossil brachiopods. He didn’t say what the rules were, and it appears that nobody living there today can remember either. We decided to challenge festival-goers to devise new rules.

Brachiopods are curious aquatic animals that are very common in the fossil record, but are much rarer today. They have shells composed of two valves, a bit like a clam, but with a very different kind of body inside. The brachiopod holds onto a rock with its long stalk-like ‘pedicle’, opens its shell, and as the water filter through, catches food with tiny fibres on its loop-like ‘brachia’ or arms. The shell can be shaped like a pottery oil lamp, giving brachiopods their common name ‘lamp shells’.

Our brachiopod fossils proved quite challenging to play with. If you rolled them, they veered sideways. If you threw them, they’d bounce in all directions. Variations on skittles, boules, bowls and dice were all suggested, and even a race game to see which would fall to the bottom of a bowl of water first. Perhaps the original game is the one suggested by a former school teacher; children in his school used to play ‘dibs’, a throwing and catching game now better known as ‘knuckle bones’, ‘jacks’ or ‘five stones’.

Writing down the rules with Eliza

We thoroughly enjoyed our time at Lyme Regis, talking about fossils, answering enquiries, helping people have fun discovering the amazing world of geology – and of course, playing ‘pundibs’!