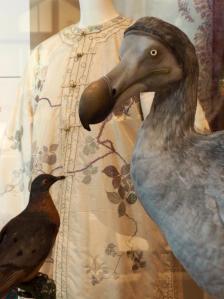 So, tell me about yourself – who are you and where do you come from?
I am a passenger pigeon (Ectopistes migratorius) from North America. I have lived at RAMM since 1865 – that’s 150 years this year!

What is it that makes you so special?
When I was alive there were around 3 billion of my kind – passenger pigeons were possibly once the world’s most numerous bird. But in 1914 the last one, named Martha, died in Cincinnati Zoo. She had never lived in the wild. My species became extinct due to hunting with guns and nets and destruction of my habitat. So like you, I can now only be seen in museums.

Who looks after you in this place?
The Curator of Natural History is responsible for me, but a team of conservators cleaned and preened my feathers before I was put on permanent display so I look at my very best.

Do you remember life before the museum?
I was once part of an enormous flock of pigeons – we would migrate across America each summer and winter. But one year I was captured, brought back to England and found myself in the studios of Rowland Ward – a famous taxidermy company in London. I spent some time with a Mr William Tombs until he donated me to RAMM with 50 cases of other birds.

What does the future hold for you?
I will be spending the foreseeable future on display here in the Finders Keepers? gallery in the heart of RAMM.  I am in a case with other extinct and endangered animals – the ivory-billed woodpecker, California parakeet, huia and orang-utan – and the display explores ethical collecting and use of natural resources. Please come and visit me – there are no dodos here but see if you can find the picture of one in my case.

Oh, and I’m on the internet so future possibilities are endless! Leave comments for me on my webpage and learn about my fellow birds on RAMM’s online Collections Explorer.

One thought on “Dodo Roadshow: RAMM”