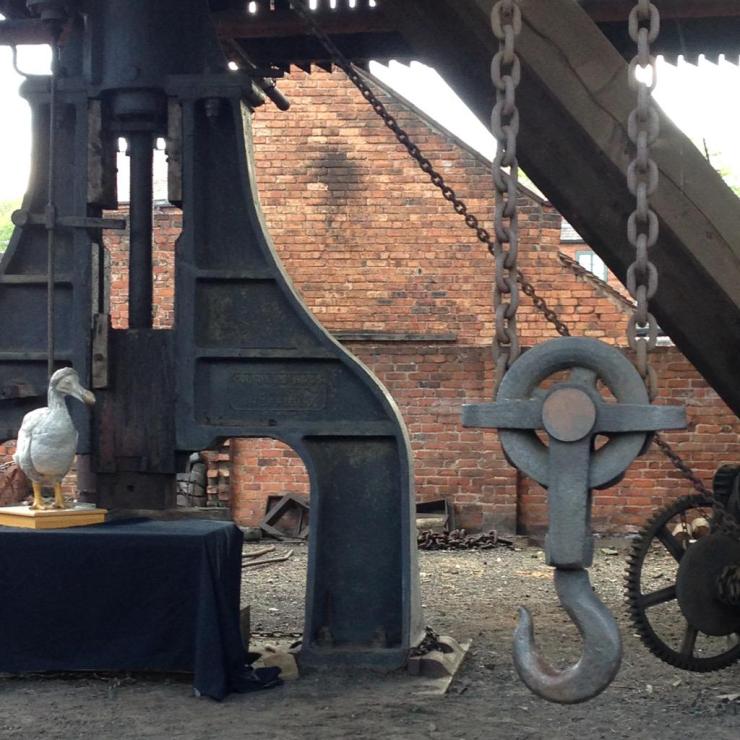 So, tell me about yourself – who are you and where do you come from?
Like you Mr Dodo I’m one of the last of my kind. I’m the steam hammer from Cradley Heath Anchor Forge. I was the last one to operate in the Black Country. You wouldn’t think it, but for a machine working so far from the sea, I helped make chains and anchors for some fine ships, and for the Royal Navy because me and my makers had the best skills with wrought iron.

What is it that makes you so special?
I combine power with precision. I could delicately crack you an egg or shape a ton of hot metal with a blow of my mighty hammer. In my prime I could do the work of ten men and never get tired thanks to my steam powered piston. I can make your whole house shake.

Who looks after you in this place?
I’m looked after by John Beckerson and his team of curators who manage the museum collections. I think I am one of their favourites.

Do you remember life before the museum?
Of course! Industrial objects like me may not say much: but we have long memories. I can remember busy days working with my men in all weathers in the open-sided forge, hammering away until the wrought iron I needed stopped being made. Then I had no more work to do and I came here for retirement in 1979 after 140 years of anchor making.

What does the future hold for you?
Well I’m not in steam at the moment because I have a few issues with my boiler – so what I would really like to do is to get back into full working order so that museum visitors can enjoy my mighty power. I have been talking to my curators and my fundraising colleagues about that. In the meantime I like warm dry weather that doesn’t make me rust, when I can watch the boats on the canal dock and keep an eye on my next-door neighbour the steel rolling mill. The chain making behind me is nice, it reminds me of old times – it’s grand to see hot metal being worked.