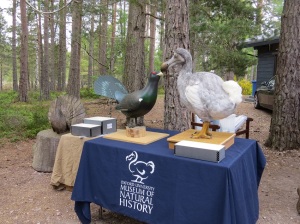 So, tell me about yourself – who are you and where do you come from?
I am a capercaillie and my home is the magnificent National Nature Reserve, Abernethy Forest. I am very lucky to live here, as it is the largest remnant of the Caledonian pine forest, which is full of tasty blaeberry for me and my chicks to feed on. My name means ‘horse of the woods’ in Gaelic: some humans think that when I do my impressive display call it sounds like the hooves of horses on cobbles.

What is it that makes you so special?
I’m special for many reasons! Where do I start? I’m very rare here in Scotland. There are only around 1,000 of me left but back in the 1970s there were as many as 20,000 of capercaillies like me! I’m also very good at a special dance called lekking. I strut around, with my beautiful tail fanned up and I make a sequence of click and pop sounds, showing off to the ladies and trying to outdo the other male capercaillies at the lek. I’m very beautiful too, with a striking red eye marking, and glorious iridescent feathers on my front. I’m also the largest grouse in Scotland.

Who looks after you in this place?
Here at Abernethy Forest I’m looked after by the RSPB. They know how special my dance is and they know how upset I get if my lek is disturbed by curious humans who want to take a peek at my fancy moves. Therefore, they ask people to watch me lek at a safe distance, hidden from my view by a hide at a special event called Caper-Watch. The RSPB also know that I fly into deer fences which can kill me, so they make sure there are no deer fences here at Abernethy. Something else the RSPB is doing to look after me is making my home bigger and better, by expanding the forest and opening up the canopy in parts of the forest where it is too dense.

Do you remember life before RSPB Loch Garten?
I don’t remember but my ancestors tell me lots of stories about before Abernethy was a nature reserve. They tell me about how people used to shoot capercaillies!  And that there was less blaeberry around for them to eat.

What does the future hold for you?
The future looks uncertain for me; there aren’t many of us capercaillies left now…and we have gone extinct in Scotland before! But the RSPB is doing lots to help me here at Abernethy, and visitors too are helping by keeping their dogs on leads during the breeding season, coming to Caper-Watch to see me without disturbing me and joining as RSPB members. So hopefully things will get better for capercaillies.