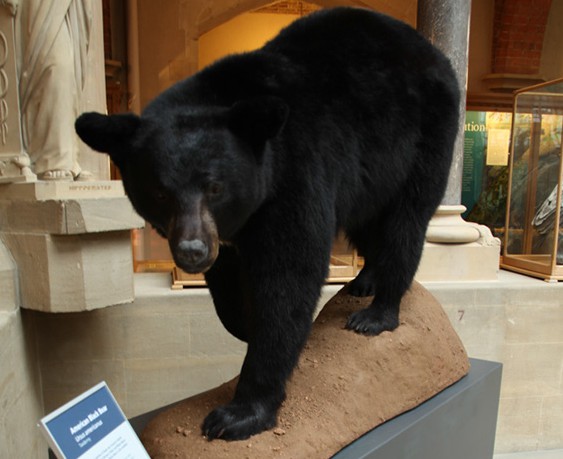 Here at the Museum we have many bird, mammal, fish and reptile taxidermy specimens on display. There are a fair few that you can touch too, on our Sensing Evolution tables in particular. Outside museums, taxidermy has seen a wider surge in popularity in recent years, featuring in artistic practice and being offered as a practical skill through taxidermy courses. It has also been the subject of ethical questions and debates.

In the 19th century, taxidermy was seen as one of the ways of bringing strange creatures from the around world to museum visitors. They were collected at a time when the natural world was thought to be an infinite resource. Many early biologists would combine scientific expeditions with collecting trips, gathering material to be studied, described and displayed in public museums.

Today, it’s no longer possible to simply order an animal from a collector and expect to receive a crate containing a specimen prepared for display. There is a raft of national and international legislation designed to ensure that biological material is ethically, legally and safely collected and transported. It is also concerned with the impact on source communities, species conservation or ecosystems, and imposes checks on the transmission of disease or pests.

When Sensing Evolution opened here in May 2015 the museum obtained two larger pieces of taxidermy to greet visitors as they enter the building: a Red Deer purchased from a farm in Belgium, and an American Black Bear, which is a donation from the New Jersey Fish and Wildlife department in the USA.

Commissioning taxidermy is not straightforward and it’s important to know which permits are needed and whether you can legally qualify to receive them. There are many laws surrounding the import and use of animal parts that you need to be familiar with.

The Museum believes in the importance of wildlife conservation and we wanted to be sure that our taxidermy specimens are ethically obtained. Neither the Red Deer nor the American Black Bear were killed for the purpose of museum taxidermy, and both were sourced following a lot of research and communication with professional taxidermists and zoological societies.

The Red Deer skin was discarded from a farm where the specimen was raised for meat; the Black Bear was euthanized by the New Jersey Fish and Wildlife department as part of its standard control measures, although in this case rather than incinerating the carcass, the skin was removed, processed and donated to the Museum. We waited for many months for a suitable specimen to become available in this way.

The result is two touchable pelts which we hope visitors will find fascinating and beautiful, and which will contribute to our understanding of these incredible animals.

For more advice or information about taxidermy contact your local museum or the Guild of Taxidermists.

One thought on “Talkin’ ’bout taxidermy”