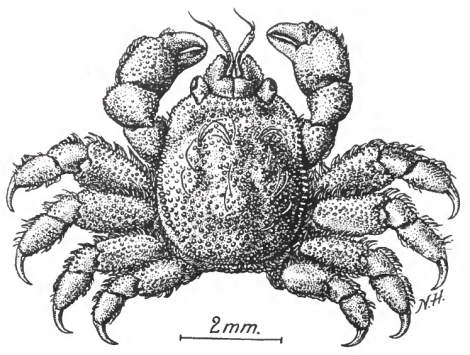 Scientists often use DNA to study the position of a species in the tree of life. By sequencing DNA from different species we can begin to see how closely they are related, but sometimes it can be difficult to obtain specimens to carry out this type of research. This is where museum collections become invaluable.

I have been investigating a tiny coral-dwelling crab, Detocarcinus balssi, which is less than 1cm in size and lives in the Atlantic ocean. In a paper just published in the Journal of Zoological Systematics and Evolutionary Research, my co-writer and I show how we have resolved where this crab is placed, taxonomically-speaking.

To establish this we needed DNA, but unfortunately the crab has only been collected on a few occasions since the discovery of the species in 1956. Luckily, the Smithsonian Institution in Washington D.C. houses several specimens of D. balssi that were collected in the 1980s.

Gall crab females carry many, many eggs, so with permission of the curator at the Smithsonian a special DNA protocol for old and degenerated material was used to extract small fragments of DNA from the eggs of a D. balssi specimen collected in 1984.

The DNA sequence that was obtained offered a surprise: the Atlantic species D. balssi is more closely related to an Indo-Pacific species Utinomiella dimorpha than any other Atlantic species. This may seem odd at first, but gall crabs probably originated before the Panama Isthmus – the landmass connecting North and South America – was fully closed. At the time, species could freely pass between what we now know as the Pacific Ocean and the Atlantic Ocean.

With this little part of the puzzle solved, the relationship between Atlantic and Indo-Pacific gall crab species can be studied in more detail.

Without the scientific collections held in museums this research could not have been completed. Researchers increasingly use museum collections, including the famous Dodo in this Museum, to answer important questions about where to fit a species in the taxonomic scheme of things – on the grand tree of life.