This year the Museum is playing host to three poets in residence as part of our Visions of Nature year. The poets, John Barnie, Steven Matthews, and Kelley Swain, have been working alongside staff in our collections and out in the Museum itself to gain inspiration for their writing over the past six months. In the autumn, they will take part in a number of events and activities to present their work, and will be publishing a small anthology at the end of the year.

Here Kelley Swain reveals what has inspired her poems during one of her recent visits to the Museum. 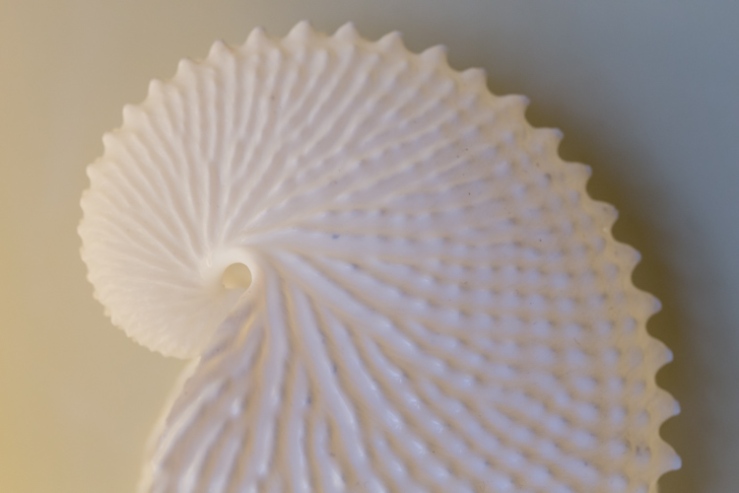 In May, I had the opportunity to meet with several curators who had previously introduced me to their collections. This time, with the orientation they’d provided, I had more specific questions:

For Monica in Minerology, I wanted to know more about what people historically considered ‘sympathies’ of gemstones. She directed me to Nichols’ Faithfull Lapidary of 1652, the oldest book in English about the properties of gemstones. The Museum has a copy of the book on loan to the Bodleian, so I’m heading in the direction of that most famous library to get to see the book, perhaps on my next visit.

With Amo in Entomology, I was eager to pay another visit to the Orchid Mantis whom I’d named ‘Daphne’ on my last visit. In the interim, the Mantis had moulted to her final life stage – she has wings and is now fully adult, but we don’t know how long she’ll live. She might not be there when I next visit. (Amo said this is the reason she stopped naming the insects – she became too attached.)

It was especially wondrous to see that Daphne’s colouring had changed from that of a bright pink-and-white orchid blossom to something darker, that looks just like a dying orchid blossom – and she seemed much less alert than before – almost sleepy. I know a bit about cryptography and camouflage, but that the lifespan of the Orchid Mantis directly correlates with the lifespan of the orchid blossoms on which it hunts is more than I might have imagined. I’ve been working on a poem about Daphne, which, by the time of our poetry-residency anthology is published, is likely to be ‘in memoriam’.

And thanks to Mark, Curator of Life Collections, I was able to finally see something that I’ve wanted to see for a very long time: not only one, but a large collection of fragile, mysterious Argonauta brood chambers. Cepalopods are a particular interest of mine, and while many people have collected marvellous ammonite fossils in Lyme Regis or admired the highly-polished specimen of a nautilus shell, Argonauta brood chambers are often mistaken for similar shells, when they are something rather different.

They are secreted by the female of the species (which is a type of octopus). Though this case is not attached to her body, she lives in it with her tentacles dangling out – she can spin it and turn it, but will never completely let go of it. This is the egg sac or brood chamber for her young: she lays her eggs in it, and when they hatch, they are in a safe, contained chamber in the sea. It’s likely that, as with many cephalopods, senescence sets in around the time the young are about to hatch – that is, the adults deteriorate and seem to have a kind of dementia, until they die and their bodies fall apart, just as the young hatch and need food.

The thing about the Argonauta that most intrigues me is that, though this papery shell is not attached to the female, she will die without it. Studies have revealed that other species of octopus, placed in cages, would squeeze out of the bars of the cage to reach food; the Argonaut, on the other hand, would not let go of its shell, remained in the cage, and died.

Argonauts can direct their buoyancy and swimming, but seem to drift with tides, and there are a few videos online of scuba divers happening upon them: they seem quite directionless and cumbersome. Despite this, to me they are, without doubt, one of the most beautiful, mysterious, and poignant creatures in the ocean, and it was a great gift to be able to see so many Argonauta cases in the Museum stores.

The Argonaut is often called the ‘paper nautilus,’ though their beautiful remnants were also called ‘fairy boats’. The best chapter I’ve read so far on these creatures is ‘Flight of the Argonauts’ by Helen Scales in her book Spirals in Time. I’m working on a poem about these marvellous creatures for the Museum residency.

One thought on “Gemstones, fairy boats and the Orchid Mantis”