This year the Museum is playing host to three poets in residence as part of our Visions of Nature year. The poets, John Barnie, Steven Matthews, and Kelley Swain, have been working alongside staff in our collections and out in the Museum itself to gain inspiration for their writing over the past six months. In the autumn, they will take part in a number of events and activities to present their work, and will be publishing a small anthology at the end of the year.

Here John Barnie reveals what has inspired him during his residency as well his creative process.

Recently, Kelley Swain and I were allowed to handle live tropical cockroaches at the Museum. They were much larger than the ones I knew when I lived for a time in Memphis, Tennessee. Those lived in the kitchen inside the stove and behind the fridge, waiting to crawl out if you turned your back for a moment while chopping vegetables or meat. Pest control officers came a few times, spraying foul-smelling insecticide everywhere, but next day the cockroaches were back, seemingly unaffected by the poison.

The tropical cockroaches at the Museum were beautiful, their exoskeletons gleaming as their antennae whirred, trying to identify what the palm of my hand might be, and I could see why some people keep them as pets.

My experience of writing poetry is that you can’t decide consciously what the subject of a poem is going to be. A poem ‘emerges’, shaping itself in the mind. Usually it is written quite quickly. There may be a good deal of revision later, but at this first stage the process is almost automatic.

I was apprehensive, therefore, about having to write poems to order as a poet in residence at the Museum. I needn’t have worried, though. During my visits so far, subjects for poems have crowded in, one on another. 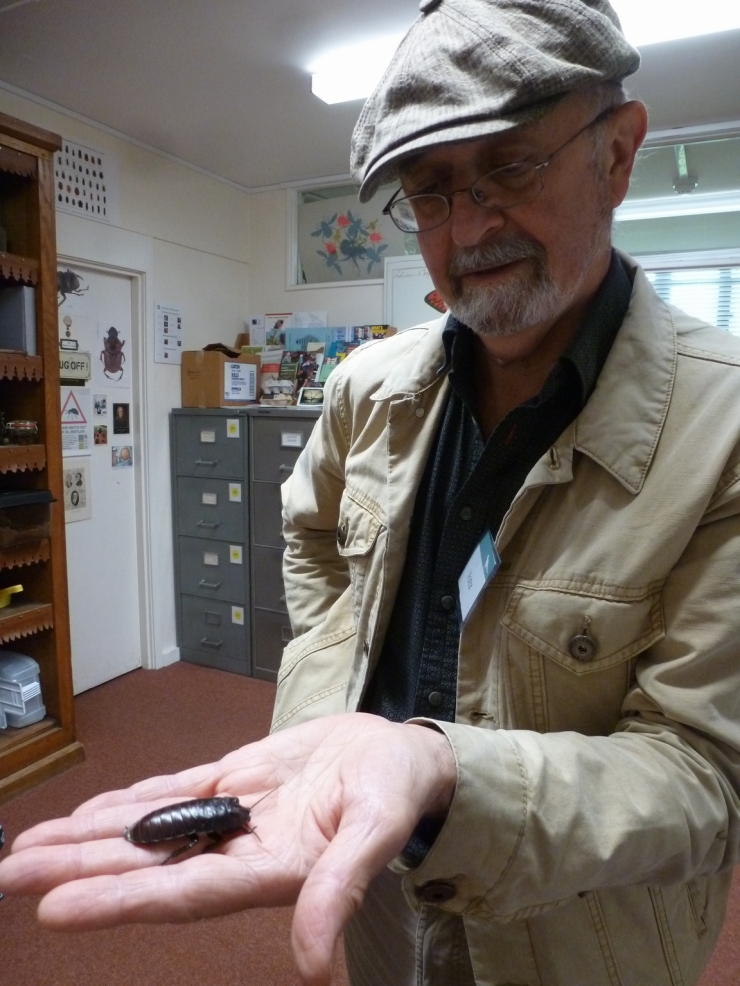 Take cockroaches. Over the years I have read a number of books on the mass extinctions that have occurred during the past 650 million years and I’m aware that leading biologists and naturalists, Edward O. Wilson and David Attenborough among them, believe we are in the middle of one now, caused primarily by our own species. Mass extinctions create bottlenecks and it seems that it is a question of luck rather than ‘fitness’ that determines which species survive to radiate beyond.

This set me thinking about cockroaches, that seemingly indestructible group of insects I encountered in Memphis and now again at the Museum. I’d bet on them getting through the bottleneck to evolve and proliferate in a brave new world. As to humans, well that’s another matter.

These experiences and thoughts gradually fused into a poem, ‘Cockroaches on my Mind’, which I never could have thought up and which certainly would not have emerged without tropical cockroaches prickling my skin that day in the Museum.