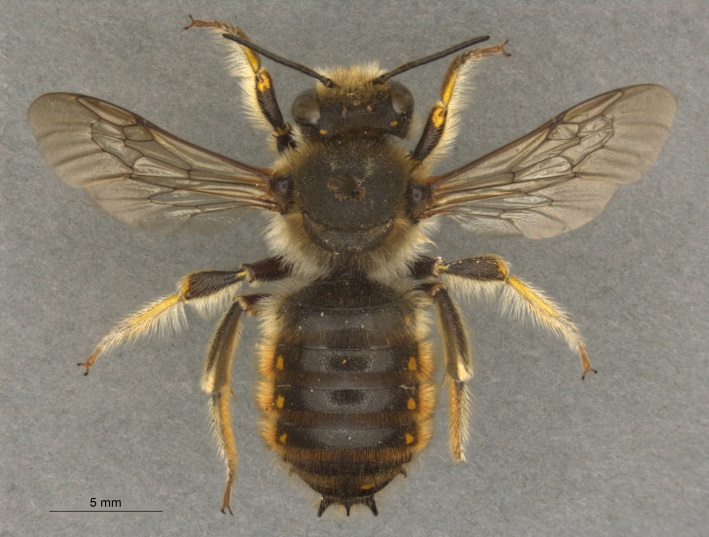 A small guardian patrols its territory among the luscious bed of Lamb’s-ears that grow at the front of the Museum. This feisty critter, the Wool Carder Bee (Anthidium manicatum), is just one of the roughly 270 bee species that buzz around Britain. Having spotted this unusual hovering bee we seized the opportunity to identify, photograph and explore the species a little further.

The male of this solitary bee species is fiercely territorial, fighting off other males as well as any other insects it considers to be intruders. Techniques used in combat vary from skilful aerial hovering to ferocious wrestling. But perhaps its greatest weapon is a series of stout spines found at the tip of the abdomen. These are used to bully an intruder into submission, or even to kill it. In so doing, the male protects the precious supply of pollen for the smaller females which in turn collect it on stiff bristles on the undersides of their abdomens.

Females, being slightly less aggressive, are in charge of constructing the nests, which are built in existing cavities such as beetle holes. Hairs shaved off plants, such as the favoured Lamb’s-ear, are used to create the brood cells for the next generation.

The Museum houses many specimens of the Wool Carder Bee and our job was to pull out the data from each one to help with an ongoing online survey about this species. Although making friends with hundred-year-old bees was enjoyable, trying to comprehend the miniscule handwritten labels accompanying them was altogether more trying.

Every label explains where and when the bee was captured, who collected and identified it, and gives the reference for its current collection. All this on a slip of paper no bigger than half a stamp.

After recording data from 120 labels we began to find the grid reference of the location each was originally collected. This too was challenging as many place names have changed in the last hundred years. Ultimately, the information will be used by the Bees, Wasps & Ants Recording Society (BWARS) to improve the distribution map for the Wool Carder Bee.

Why not see if you can spot the Wool Carder Bee in your garden? Characteristics to look out for include small spines on the tip of the abdomen and lateral lines of yellow spots on either side of the abdomen. The bees themselves are about 11-13mm long for females, and 14-17mm for males. Good luck!

One thought on “The bully bee”