It is often said that the final frontier of our exploration of the Earth lies deep in the oceans. Covering 70 per cent of the planet’s surface, the oceans nevertheless remain 95 per cent unexplored, according to the National Oceanic and Atmospheric Administration in the United States. And they know, for they are doing the exploring…

Since 2008, the Okeanos Explorer at the NOAA has been investigating deep water ecosystems and has live-streamed many of its remotely operated vehicle (ROV) dives for scientists and the public to observe. Last year, Okeanos was engaged in an exploration of the Mariana Trench Marine National Monument in the Pacific Ocean. During a single dive at an impressive 4,826 metres, on a muddy bottom at a site nicknamed Twin Peaks, a large shrimp was observed, which the participating scientists did not recognise.

This was an unexpected find. Although there are about 4,000 species of caridean shrimps in the world’s oceans, very few live below 1,000 metres, and fewer than 20 species are known from depths lower than 3,000 metres. Those that do are usually only found as broken specimens, creatures damaged by the trawls which also bring them to the surface.

Photos of the deep-dwelling shrimp were duly sent to two experts: Dr Mary Wicksten at Texas A&M University and Dr Sammy De Grave, head of research here at Oxford University Museum of Natural History. Both immediately recognised the specimen as belonging to the rare genus Bathystylodactylus, which comprises of only three scientifically-described species, which in turn are only known from six specimens, all damaged. 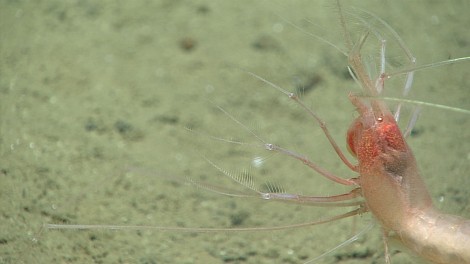 The bristly legs are used in passive filter feeding

The Okeanos team had made something of a discovery, one which was published in the open access journal Zookeys. The posture of the shrimp clearly show it to be a filter-feeding species, with its long, bristly legs facing into the current. This type of feeding behaviour has not been seen in caridean shrimps before.

Surprisingly, although the shrimp was observed at almost 5,000 metres below the surface, it is not the deepest recorded shrimp. That honour goes to a different species, Glyphocrangon atlantica, living in the western Atlantic, which has been trawled from as deep as 6,373 metres. Blurry photographs from 6,890 metres in the Kermadec Trench might indicate that carideans live even deeper still, maybe even as far down as a related group of shrimps called dendrobranchiates, which are known from depths down to 7,703 metres.

These findings show that life of many kinds continues to be discovered in regions of the planet once thought to be completely inhospitable.