For the past few years the Museum has been working with second year students on the BA (Hons) Illustration course at the University of Plymouth. As part of a module on interpreting information, students are given information on research that is going on in the Museum or related departments and asked to interpret this information visually. This year one of the students, Sally Mullaney, took on the project ‘Key to the Past: exploring the life and work of Charles Lyell’. Sally continued her work with the museum on a week’s placement during the summer, and was supervised by Eliza Howlett, Earth Collections Manager.

Sally Mullaney talks about how she interpreted the project and her experience here at the Museum.

“For the past two months on my illustration course at Plymouth University, I’ve been working with the Museum of Natural History on an illustrated timeline of geologist Charles Lyell. At first I was pretty daunted at the amount of travelling and ‘geologising’ he did in his life throughout the Victorian era. But after I spent time reading his letters and journals, I really got a feel for what Lyell was like. His musings and good humour shine through in his many letters to various siblings, professors and his wife, Mary. This really made the Charles Lyell project a pleasure for me to do, and I was thrilled when the museum asked me back to work for a week’s placement continuing with Lyell.”

After a weekend of sightseeing Oxford’s many attractions (the museum being one of them!), Jade, a fellow student from Plymouth, and myself reported to the front desk to begin our week.  We were welcomed warmly with a cup of tea overlooking the main court of the museum, and were briefed about the week to come. I was also given the opportunity to work with the Public Engagement team to create a new logo for the Family Friendly Sunday events, as well as the continued work on Lyell which would be a map illustrating his travels and collections.

The week really flew by and I managed to complete the projects with a little time to spare, which I spent sketching in the court amongst the dinosaurs! The building is such an incredible place to work in, and it has been a pleasure to be working in such a fantastic museum – I’ll definitely be visiting again!”

Sally’s characterful and charming illustrations of Charles Lyell’s bring his geological travels across Europe to life. Charles Lyell (1797-1875) was a student of William Buckland at Oxford, and went on to become the foremost geologist of his day. The Museum is lucky to house a large proportion of the Charles Lyell Collection, comprising of over 16,000 documented fossil specimens. A number of the specimens in the collection would have been collected in Europe during his travels. 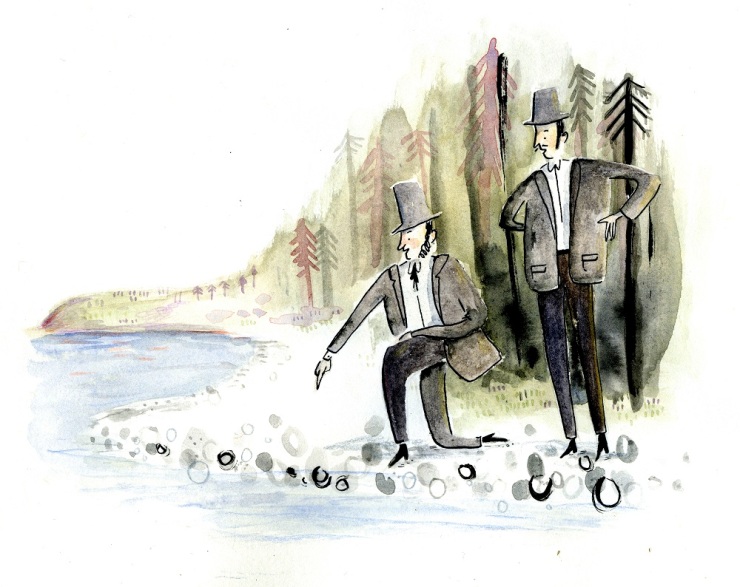 Lyell was a close and influential friend of Charles Darwin. Lyell’s important Principles of Geology was one of the few geological books that Darwin took with him on his voyage with HMS Beagle, and it helped shape his hypothesis for the mechanism of coral atoll formation amongst other things.

Last year the Museum undertook the large task of starting to make Lyell’s collection publicly accessible by cataloging and taking high resolution images of the specimens. The collection will be available online via a user-friendly database in the foreseeable future – watch this space!

You can learn all about the project, the collection and the man himself via this dedicated blog.