If you could create an experiment to learn more about the human brain, what would you investigate? We posed this question in our Big Brain Competition last year, as part of the Brain Diaries exhibition with Oxford Neuroscience, and received a whopping 800 entries!

For the competition, Oxford University neuroscientists offered people the chance to use the state-of-the-art MRI scanner at Wellcome Centre For Integrative Neuroimaging at the John Radcliffe Hospital to investigate a burning question about the brain. We had ideas from the young and old, and by visitors from all around the world suggesting brilliant questions and some fascinating experiments.

Sadly, only one experiment could be carried out, so an overall winner was picked from the ‘feasible experiments’ category. The winning experiment was suggested by Richard Harrow, who wanted to understand how the brain identifies voices.

A person is put in the MRI scanner with headphones on.  They are shown a photo of a person familiar to them, either a friend, family member or celebrity.  Then, in their headphones they are played the voice of a person, but the voice is either sped up or slowed down.
They are required to say whether the face on the photo matches the voice they have heard. What happens in the brain when this confusion of audio and visual information is occurring? Will the brain find a way to identify the vocal signature of the voice, even if distorted, and be able to say with conviction if the photo and the voice are a match?
– Richard Harrow, winning competition idea

On the day of the experiment, the winners and runners-up headed over to the WIN Centre to watch Richard’s winning experiment being conducted. The experiment was streamed live by Oxford Sparks and we had a clear result from the test, as neuroscientist Dr Holly Bridge explains:

The scans show that when you’re getting information that corresponds in both your auditory and your visual system you get a boost in your brain activity. We can detect that the brain does respond differently depending on whether or not you can match the face with the voice; it clearly has a lot to do with expectation.

The scientists also wanted to answer as many of the other great brain questions as possible. So a series of articles picks out some of the broad themes in the competition ideas, including lifestyle, muscle memory and stress. Researchers also answered more big questions live on Facebook during this year’s Brain Awareness Week.

Thank you to everyone who suggested an experiment or asked a question; it made for a fascinating conclusion to the Brain Diaries exhibition, and has definitely increased the amount of brain activity from staff across the Museum and Oxford Neuroscience… if only there was an MRI scanner for us to see it!

You can still get involved with the Big Brain Competition by trying the winning experiment at home.

There are plenty of reasons to visit Didcot. The railway station is an important junction between Oxford and the west of England, the Didcot Railway Centre houses a great collection of trains, if you like that sort of thing, and Didcot Town Football Club are currently a respectable fourth* in Division One West of the Southern League…

But if that’s not enough to tempt you, Didcot is also home to the UK’s only synchrotron – a multi-million pound facility that goes by the name of Diamond Light Source. In February, six members of the Museum’s research team visited Diamond to carry out some important experiments on spiders.

But before we get to that, what exactly is a synchrotron light source? Well, it is a type of particle accelerator which uses huge magnets to speed up tiny particles, usually electrons, until they are moving almost as quickly as the speed of light. The particles are sent flying around a ring-shaped machine hundreds of metres across – the ‘doughnut’ structure in the photo.

This beam of high-energy particles gives off large amounts of ‘light’, or electromagnetic radiation, when its direction is changed. This radiation, usually in the form of X-rays, can be funnelled down to experimental stations, known as beamlines, and used for lots of different measurements and experiments. As the UK’s national synchrotron light source, Diamond is visited by scientists from all over the world every year.

So what does a museum want with a powerful X-ray beam? One of our research fellows, Lauren Sumner-Rooney, is particularly interested in studying the eyes and brains of spiders. So the team, led by Lauren, went to Didcot to create some X-ray images of spiders from the Museum’s collections.

You may not have looked too closely at a spider’s head before, but they usually have eight eyes as well as eight legs. That said, there is actually quite a lot of variation in the number and structure of eyes between different species, and Lauren is interested in documenting this variation across selected spider families to investigate how it affects spiders’ brain structures.

Using the I13-2 beamline at Diamond, and fighting severe sleep deprivation with the aid of strategically-selected songs and snacks, the team was able to visualize details measuring less than one thousandth of a millimetre without damaging the precious specimens. They were assisted by Andrew Bodey, a senior support scientist at Diamond, and Emelie Brodrick, a PhD student at the University of Bristol.

Over the course of 72 straight hours, the team scanned 116 spiders, creating about 14 terabytes of data. This will form the basis of a variety of exciting scientific research projects at the Museum over the coming years. Watch this space for the results!

*Didcot Town were fourth in the Southern League Division One West table on 8th March. The Museum accepts no responsibility for any change in their position after this date.

University of Toronto research fellow Jacqueline Zimmermann recently ran one of our Brain Spotlight events as part of the Brain Diaries exhibition programme. To mark World Alzheimer’s Day today, here Jacqueline tells us about the neurophysiology of Alzheimer’s disease and the risk factors we can actively reduce to lead happier, healthier, and longer lives.

Almost all of us have in some way been affected by Alzheimer’s disease, which makes the quest for a cure that much more personal. An estimated one in nine people over the age of 65 will develop the disease, and this risk also increases with age, according to the World Alzheimer’s Report in 2015.

Due to chemical toxins, and increased longevity, the incidence for Alzheimer’s disease is on the rise. But the good news is that there is a lot that you can do to reduce your risk. At the John Radcliffe Hospital in Oxford, hundreds of scientists are currently working towards identifying the cause and the solution to the disease.

At the Brain Spotlight event at the Museum I presented images of ageing brains, and explained how brains affected by Alzheimer’s have reduced volume in the temporal lobe and the hippocampus, regions critical for language and memory respectively. Diseased brains will also often show reduced frontal lobe volume, which may reflect the changes in personality and the ability to engage in planning which area associated with Alzheimer’s. The overall volume of the brain is also reduced in sufferers because cellular changes lead to the death of neurons.

Recently, a number of genes have been identified that are related to early onset Alzheimer’s, which is quite rare and much more hereditary than late-onset Alzheimer’s. At the Nuffield Department of Clinical Neurosciences, where I am a visiting researcher, we are investigating a late-onset Alzheimer’s risk gene called Apolipoprotein 4 (APOE4), looking at how it relates to subtle cognitive impairments in middle-aged people. Working with the Oxford Biobank we are trying to determine which cognitive assessments may be most effective in predicting these impairments.

Although some of us may be more susceptible to Alzheimer’s than others, there are a number of environmental factors that contribute, including air pollution or additives in our food, like nitrogen-based chemicals which are used to preserve and flavour processed foods. It is important to reduce cholesterol in the diet, eat plenty of fruits and leafy greens, and engage in frequent physical and mental exercise.

Though there is speculation about the effectiveness of ‘brain games’ and how they translate into improvements in cognition in the real world, there are certainly large benefits of keeping your brain active. 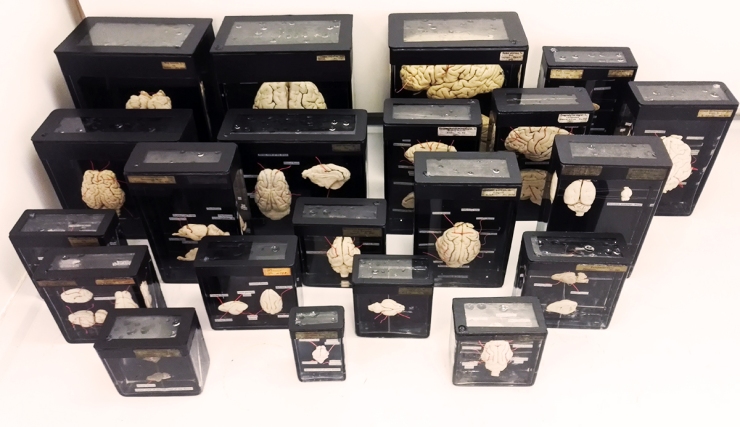 Our next exhibition – Brain Diaries: Modern Neuroscience in Action – opens on 10 March and in preparation we have indulged in a little bit of brain-washing… This article contains an image of a preserved human brain.

One of the first displays visitors will encounter is a ‘wall’ of 23 fluid-preserved mammal brains – from a Short-nosed Bandicoot to cow. The style of jar, with its black bitumen and paint backing, tells us that these were once used for display so it is exciting to put them in the public galleries again. Museum conservator, Jacqueline Chapman-Gray, runs us through the meticulous process she undertook to ensure these brains will look their best for their return to the limelight.


A number of the brains had become dehydrated over time as the level of fluid – alcohol – had dropped. These needed to go through a rehydration programme to ensure their long-term preservation. This is more complex than simply adding more fluid to the jar. Instead the alcohol level needs to be increased gradually to avoid damaging the tissues. Others had started to detach from their glass mounts, or anatomy labels that marked each of the different areas or sections of the brain had come loose. These were carefully remounted using specialist conservation-grade materials and a steady hand! Three brains had become completely detached and were repaired using a polyester monofilament thread, otherwise known as fishing line.
For the smallest of the brains a normal sewing needle was enough to pass through the tissues but for the larger two either a flexible 10cm beading needle or large 25cm mattress needle was needed. The original threading points were reused wherever possible though in one case this proved to be too difficult, as the tissue was soft and susceptible to breaking. With precision and patience I was able to gently stitch them back into place on the backing plate so they look as good as new.

All of the jars were given a thorough clean to ensure that seals were tight fitting and that the contents were shown off to their best. They were then filled with fluid to 4/5ths from the rim and the brains gently placed back inside.

Lids were sealed with clear silicone and each jar was topped up with a syringe through a small hole in the lid that is there for this very purpose – once full, this hole is also sealed.

Lastly, after the seals had dried, for the final finishing flourish black paint was reapplied to the backs and tops of the jars to provide a contrasting backdrop.

Brain Diaries opens on Friday 10 March and runs until Monday 1 January 2018. Take a look at the website to find out more about the exhibition and accompanying programme of events at braindiaries.org
Loading Comments...