University of Toronto research fellow Jacqueline Zimmermann recently ran one of our Brain Spotlight events as part of the Brain Diaries exhibition programme. To mark World Alzheimer’s Day today, here Jacqueline tells us about the neurophysiology of Alzheimer’s disease and the risk factors we can actively reduce to lead happier, healthier, and longer lives.

Almost all of us have in some way been affected by Alzheimer’s disease, which makes the quest for a cure that much more personal. An estimated one in nine people over the age of 65 will develop the disease, and this risk also increases with age, according to the World Alzheimer’s Report in 2015. 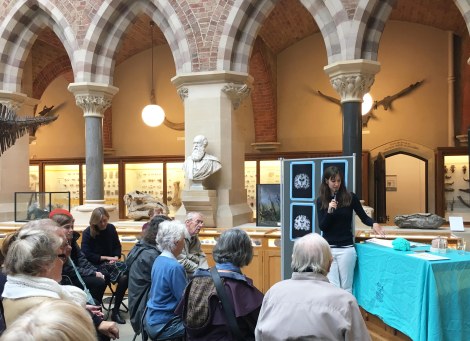 Due to chemical toxins, and increased longevity, the incidence for Alzheimer’s disease is on the rise. But the good news is that there is a lot that you can do to reduce your risk. At the John Radcliffe Hospital in Oxford, hundreds of scientists are currently working towards identifying the cause and the solution to the disease.

At the Brain Spotlight event at the Museum I presented images of ageing brains, and explained how brains affected by Alzheimer’s have reduced volume in the temporal lobe and the hippocampus, regions critical for language and memory respectively. Diseased brains will also often show reduced frontal lobe volume, which may reflect the changes in personality and the ability to engage in planning which area associated with Alzheimer’s. The overall volume of the brain is also reduced in sufferers because cellular changes lead to the death of neurons.

Recently, a number of genes have been identified that are related to early onset Alzheimer’s, which is quite rare and much more hereditary than late-onset Alzheimer’s. At the Nuffield Department of Clinical Neurosciences, where I am a visiting researcher, we are investigating a late-onset Alzheimer’s risk gene called Apolipoprotein 4 (APOE4), looking at how it relates to subtle cognitive impairments in middle-aged people. Working with the Oxford Biobank we are trying to determine which cognitive assessments may be most effective in predicting these impairments.

Although some of us may be more susceptible to Alzheimer’s than others, there are a number of environmental factors that contribute, including air pollution or additives in our food, like nitrogen-based chemicals which are used to preserve and flavour processed foods. It is important to reduce cholesterol in the diet, eat plenty of fruits and leafy greens, and engage in frequent physical and mental exercise.

Though there is speculation about the effectiveness of ‘brain games’ and how they translate into improvements in cognition in the real world, there are certainly large benefits of keeping your brain active.