Helen J. Bullard is a PhD candidate at the University of Wisconsin–Madison whose research aims to tell the historical and cultural stories of the horseshoe crab. After visiting the museum, and reading the story of our Natural History After-School Club member’s horseshoe crab fossil find, Helen offered to write a guest post for the blog about these amazing, ancient mariners…

You’re reading this, so I’m guessing you like museums. But have you ever heard of living fossils? Animals such as sharks and crocodiles are often referred to as ‘living fossils’ because they appear pretty unchanged from their ancient fossilized relatives. Of course, by definition, you can’t be both alive and a fossil. But fossils allow us to become primary eyewitnesses to ancient life; we can literally see what life used to look like, how cool is that? They can also dole out some pretty valuable advice, if we just choose to listen.

This summer during a visit to England, I spent some time at the Museum studying another so-called living fossil, the horseshoe ‘crab’. The horseshoe crab is not actually a crab, but is instead more closely related to spiders, scorpions and ticks. In fact, they are the closest living relatives of the extinct trilobites. But unlike their famous trilobite cousins, horseshoe crabs have survived all five of Earth’s major mass extinction events. Today, as a direct result of their ability to survive, the four remaining species of horseshoe crab play a vital role in global medical safety.

The Museum’s fossil specimen of Mesolimulus walchi, from the Upper Jurassic (163-145 million years ago), Solnhofen Germany, shows how little the form of the horseshoe crab has changed since

Not only do living horseshoe crabs look very similar to their early relations, they are also able to survive surprisingly severe injuries that often leave them missing body parts. Being able to see, through fossil evidence, how little their form has changed over time has helped to uncover the answer to this secret superpower. It lies in a very special life-saving trick that the crabs have kept for millions of years: a coagulating blood protein. 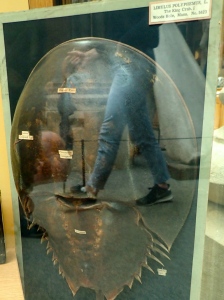 The blood of the horseshoe crab is able to clot quickly if bacteria are introduced, preventing infection, and saving the crab’s life. Since this discovery in the 1970s, this life-saving protein has been extracted from horseshoe crab blood and used in human medicine to test the safety of vaccines, medical laboratories, intravenous drugs, implants, and much, much more. The chances are that you owe a great deal of gratitude to the horseshoe crab.

But after all that surviving, horseshoe crabs, like many species, are now struggling for survival. They are losing their spawning grounds because of coastal development, industry, housing, marinas and coastal defense structures; they are collected and killed by the millions for bait, and bloodlet in their hundreds of thousands for medical use every year. It is likely that horseshoe crabs will not survive much longer.

But don’t despair. Museums are critical because they hold collections that can unlock knowledge about environmental change, and we can use that knowledge to protect life. Of course, horseshoe crabs are not alone in telling their stories through the fossils they leave – natural history museums are full of stories in stone, bones, pollen, and other traces. If you want to learn about and protect biodiversity, visit your local museum, or support organisations like Oxford’s Environmental Change Institute.

And to help the ancient horseshoe crab itself, join in with the efforts of the Ecological Research and Development Group – the crabs have saved us, so let’s return the favour.