A genetic map of Britain 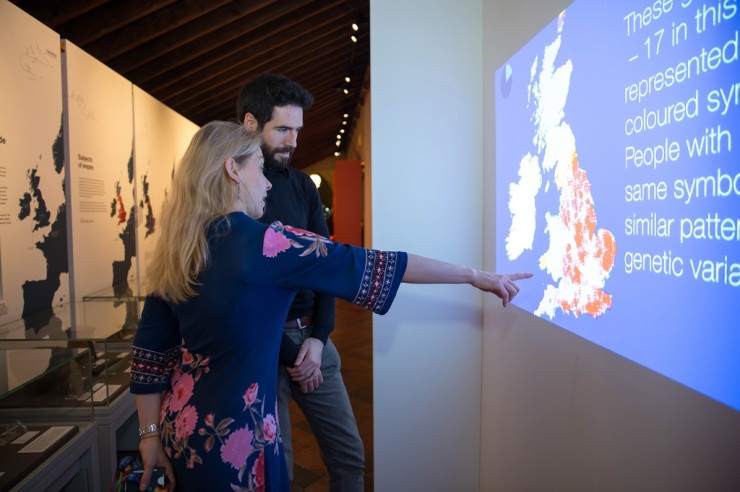 Our Settlers exhibition tells the story of the peopling of Britain, from the arrival of the earliest modern humans over 40,000 years ago to the population of the present day. At the centre of the exhibition is a genetic map of Britain – the first of its kind to be produced of anywhere in the world. But what exactly does this map show us and how was it created? Brian Mackenwells from the Wellcome Centre for Human Genetics explains…

We obviously can’t travel back a hundred years and sequence people’s DNA, so the next best thing is to sequence the genome of people whose grandparents were all from the same rural area. This is because people in rural areas at that time had a tendency not to travel very far, so the researchers guessed that the genes of their descendants would be like (slightly jumbled) snapshots of the genetic history of the area they were from.

This video, commissioned from Oxford Sparks especially for the exhibition, expands on this idea.

So the People of the British Isles researchers sequenced the DNA of just over 2,000 people and set to work analysing it all. The scientists looked for individuals with common genetic patterns and grouped them together. They had no idea where the individuals were actually from; the system just grouped people whose small genetic variations seemed to be the most similar to each other.

Here’s an example of the process. Imagine you were presented with a list of colours like these and asked to group them.

There would be a ‘sort of red’ group, a ‘sort of green’ group, and a ‘sort of blue’ group. This is what the pattern-matching system was trying to do with genetic codes: make clusters of people who seemed to be similar to each other based on very small genetic variations.

But the really surprising bit came next. We took each individual in the study and plotted them on a map of Britain based on the location of their grandparents, using a symbol to denote which genetic cluster they had been placed in.

We weren’t sure what to expect. Would the symbols be spread out randomly over the map,  or would there be groupings? What might the groupings mean?

The result was striking: the genetic clusters are, for the most part, linked to quite specific geographical areas, as you can see in the final map here.

What is this map revealing to us? When we compared these different groups to the unique genetic markers of different European populations, working with archaeologists and geographers, we were able to start to understand the meaning of the map. You can clearly see the genetic footprints left by historical migration and events from hundreds of years ago. The video below explains more about this.

The locations of many of the clusters correspond to regions controlled by known historical tribes and kingdoms. The map also shows how places like Northern Ireland and Western Scotland seem to share a genetic heritage.

You can learn more about the map, and the things we’ve learned from it, at the Settlers exhibition until the 16 September 2018. 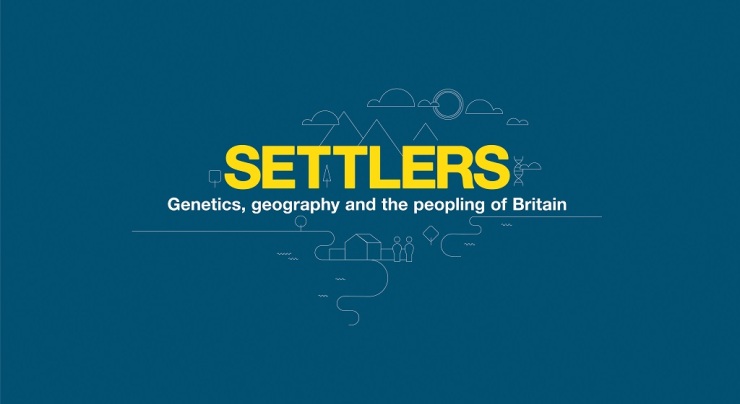 Our new exhibition Settlers, which opens today, shows that the history of the people of Britain is one of movement, migration and settlement. Here, exhibition writer Georgina Ferry finds that Britain has been receiving new arrivals since the last Ice Age.

In Britain following the Brexit vote, the word ‘migration’ has taken on an emotional and political charge. A new exhibition opening today takes a long-view of the movement of people, looking in particular at how migration has formed the British population.

Settlers: genetics, geography and the peopling of Britain tells the story of the occupation of Britain since the end of the last Ice Age, about 11,600 years ago. From this perspective, today’s pattern of movement into and out of the country is only the latest in a long history of alternating change and stability that has made the people of Britain who they are today.

Tracing these movements has been a fascinating detective story, with clues coming from many different types of evidence. The starting point for Settlers is a remarkable study carried out by Oxford scientists, who used DNA samples from contemporary British volunteers to trace the origins of the people who settled Britain between the end of the Ice Age and the Norman Conquest of 1066. One striking finding is that the bonds that unite Celtic communities in Cornwall, Wales and Scotland are largely cultural – genetically these groups are quite distinct.

The genetic evidence adds a new dimension to the archaeological story, based on artefacts left behind by our ancestors, or other historical signposts such as place names. For example, although occupying Roman armies left us the names of their forts and cities, they don’t seem to have left much of their DNA. They came, saw and conquered, but didn’t stay in large enough numbers to make a genetic impact on the native British population. In contrast the Anglo-Saxons, who arrived after the Romans withdrew, left a strong genetic signature everywhere except Wales and the Scottish Highlands.

It took 2,000 volunteers and software that can distinguish tiny differences to arrive at the various regional clusters that came out of the study. When you visit the exhibition, you can play a fascinating interactive lottery game to see just how unlikely it is that genes from any specific ancestor of more than a few generations will still be in your DNA.

The story of movement and settlement doesn’t stop in 1066. Researchers in Oxford’s School of Geography have plotted census data since 1841 against global events, from the persecution of Russian Jews to the enlargement of the European Union, to illustrate the ebb and flow of people from and to Britain that has produced the current population mix. Another interactive lets you compare your own family’s journey with those of all the other visitors. 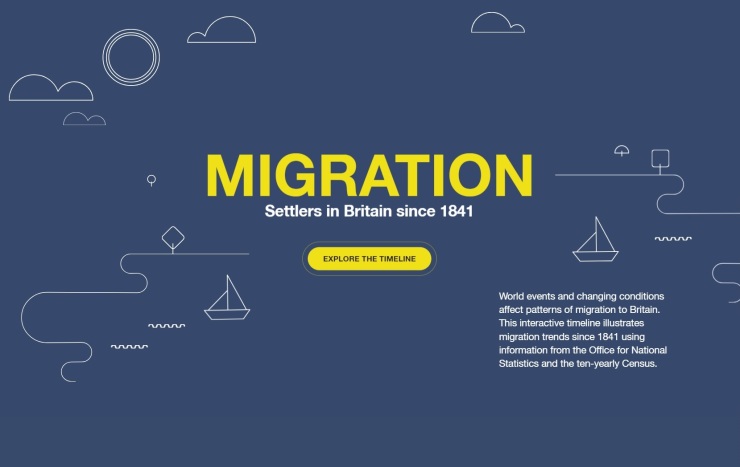 We will have to wait until the census of 2021 to know what a difference Brexit will make, but we can be sure that people will be arriving and leaving for a lot longer than that.