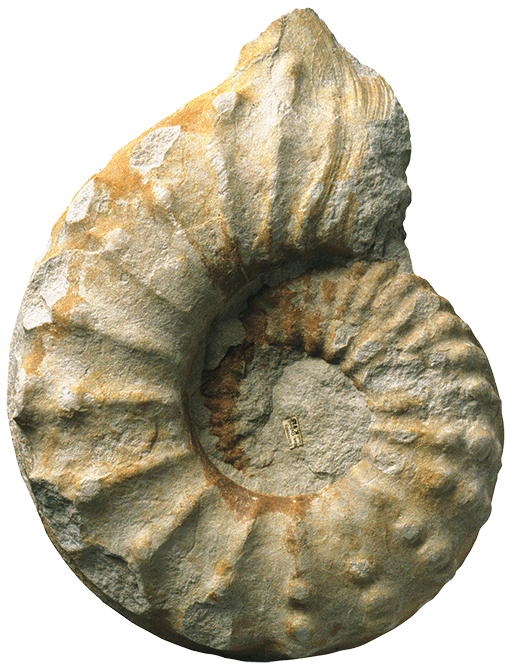 This week’s What’s on the van? comes from Eliza Howlett of the Museum’s Earth Collections.

This ammonite belongs to the genus Mortoniceras, introduced by the American palaeontologist F. B. Meek in 1876 in honour of his colleague Samuel Morton (1799-1851). The species name rostratum refers to the rostrum, the curved projection near the opening of the shell.

This specimen was collected by William Buckland (1784-1856), Oxford’s first Reader in Geology. It was originally described and illustrated by Buckland’s friend James Sowerby in 1817 in his Mineral Conchology of Great Britain, the earliest work to describe all of the fossil shells then known from the country. The specimen lived during the Cretaceous Period and is approximately 100 million years old. It was found in a marine rock formation called malmstone at the hamlet of Roke, near Benson, 10 miles southeast of Oxford. Malmstone is a distinctive fine-grained grey green rock, widely used in buildings in the area.

Ammonites are an extinct group of molluscs whose closest living relatives are squid and Nautilus. They had an external shell made up largely of mother of pearl. As in Nautilus, the animal’s body moved forwards periodically as the shell grew, and the back end of the body secreted an intricately folded plate called a septum after each move, so that the shell was divided into a series of chambers with the animal’s body in the last chamber. The rostrum of our specimen tells us it was an adult and had stopped growing. Ammonites floated freely in the water column, probably feeding on plankton. Although they are traditionally illustrated with the body chamber at the top, in life they were actually the other way up, with the body chamber at the bottom.

Though originally described from Oxfordshire, Mortoniceras rostratum floated its way around the Cretaceous world, and specimens are known from Texas, Japan, South India, Madagascar, South Africa and elsewhere.