In May this year we opened Natural Histories, our collaborative exhibition with the Museum  of the History of Science on Oxford’s Broad Street, who hosted the displays. As we wrote at the time, it was a great opportunity to put on view some lovely and important specimens while we were closed. It also linked nicely with the long history of the museums in Oxford, beginning as far back as 1683.

It was a lot of hard work pulling together all the material, themes, and displays for Natural Histories so we were particularly pleased when Banbury Museum, one of the University museums’ development partners, approached us asking if the exhibition might tour there…

And so it has. It’s a short, one-stop tour admittedly, but with a bit of jiggling and reconfiguration here and there, the whole Natural Histories show is now open to the public in Banbury.

So if you missed it at the Museum of the History of Science, head over to Banbury Museum by 22 February 2014 and have a look.

There’s plenty to see, including the jawbone of the Oxfordshire Megalosaurus, the world’s first scientifically-described dinosaur; creatures collected by Charles Darwin; and a meteorite the age of the Earth itself. With touchable specimens too (of course), Natural Histories explores some big themes and ideas that have shaped our understanding of the natural world.

But as the finished exhibition is now on display for all to see, here instead are a few behind-the-scenes shots of the late night measuring, painting, fixing and adjusting that were needed to get everything ready for opening day last Saturday. Thanks very much to everyone who mucked in and helped out. 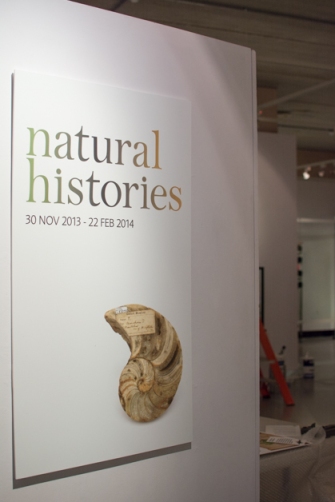