To mark our selection as a Finalist in the Art Fund Prize for Museum of the Year 2015 we’re embarking on a unique and ambitious tour of the country – the Dodo Roadshow. Beginning at Land’s End on 8 June and concluding in John O’Groats one week later, the famous Oxford Dodo will visit more than 20 museums and galleries along the way. At each stop the Dodo will ‘interview’ one of the venue’s star objects. 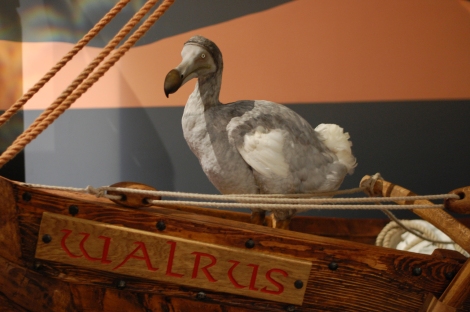 Squawk! I’m on the Walrus, a 14m Viking ship. It’s the first stop on my tour and what a way to start!

So, tell me about yourself – who are you and where do you come from?
Viking cargo ship built from oak in Denmark in the 11th century. I plied the seas of northern Europe carrying all sorts of wares like furs, antlers, amber, silver and of course walrus ivory, a most desirable item in great demand by those with a bit of spare money to spend. I am 14m long and 3.3m wide and I have a tall mast which can carry a huge square sail made of woven wool.

What is it that makes you so special?
My name is Walrus – or Hrosshvalr in Old Norse meaning horse whale. Everyone who visits the Maritime Museum can climb aboard me and explore my beautiful craftsmanship; from the hand-carved stems to the overlapping planks characteristic of clinker-built ships of the Viking Age. They can discover my cargoes by smelling and feeling the goods stored in the barrels, chests and baskets. The Vikings built the best ships that could cross oceans and go far inland up rivers. I’m more used to hopping from coast to coast and am mainly powered by the wind.

Who looks after you in this place?
I was built and am looked after by the Maritime Museum’s Boat Team.

Do you remember life before the museum?
When I said I was built in the 11th century in Viking Denmark, in fact I have come back from the dead for this very special exhibition, Viking Voyagers. After my trading days I was scuttled – or deliberately sunk – in the Roskilde Fjord around the year 1000 with a few other ships, apparently to create a defence against sea-borne attacks from elsewhere. I don’t know why. I’m just glad to be back again and to have thousands of people marvel at how splendid I am. If they hold my steering oar or styrbord (where your modern word starboard comes from) they might be able to imagine all the adventures I had 1000 years ago.

What does the future hold for you?
I am content here to tell my story for the duration of this very special exhibition Viking Voyagers which will remain at the Maritime Museum until early 2017. Then? Who knows. Perhaps I’ll end up dead as a Dodo again.