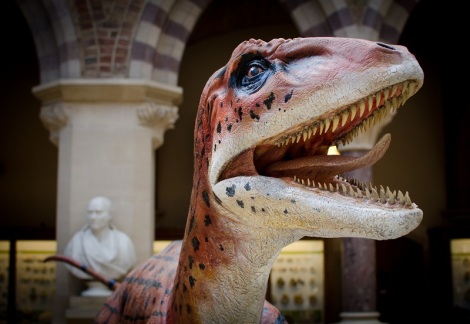 It’s not often that one of our residents flees the roost to take up home elsewhere: usually once you’re in the Museum that’s it, accessioned for life (or, more accurately, death). However, one of our former dinosaur aisle characters is now looking for a new home…

The four-metre long Utahraptor model has been with the Museum since 2000, during which time it escaped to take up temporary residence in Blackwell’s book shop in Oxford city centre as part of the award-winning Goes to Town project. This time, however, the Utahraptor will be leaving us for the last time as part of a reorganisation of the Museum’s offsite store, where the model is currently residing. 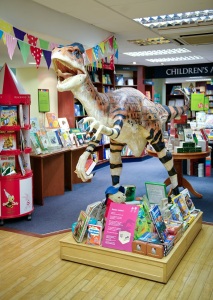 The Utahraptor model in Blackwell’s bookshop as part of the Goes to Town project. Photo: Mike Peckett

But rather than just ditch this Cretaceous creature unceremoniously we’d like to offer it out to new keepers, ideally somewhere with a public space where the model can be enjoyed by others. So, fancy yourself as a dinosaur owner? If so, check out our selection form for details of what it takes to keep such a pet.

We’re asking people to make a case for the Utahraptor to move to their venue and we will donate the model free of charge to whoever is selected. The closing date for submissions is 5 August and the selected venue will be announced by 12 August. We need to deliver the model to its new home on or before 23 September. 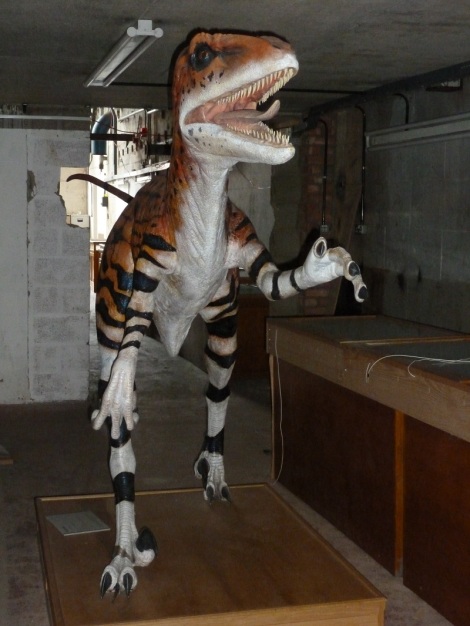 “Get me outta this place!” – the Utahraptor is currently in the Museum’s offsite storage

At this point you probably want some Utahraptor facts to help with your decision, right? Well, here you go:

Utahraptor means ‘Utah’s predator’ and the animal is known from fragmentary fossils found only in Utah in the United States. There is just one known species, Utahraptor ostrommaysorum, which was alive in the early Cretaceous period, around 125 million years ago.

It is thought that like most dinosaurs of its type (dromaeosaurids) the Utahraptor was feathered, although no direct evidence has yet been found. The Museum’s model, made by Crawley Creatures, does not represent a feathered example of this species. It’s likely the beast was not bright orange too, but who knows?

We looking forward to reading your submissions…