Museums are a place for many things: inspiration, learning, conservation… the list goes on. But we believe that they should also be a forum for debate and discussion. One of our aims, as part of our Contemporary Science and Society exhibition and event series, is to bring controversial or challenging ideas to our visitors and to encourage a lively, informed and balanced debate.

Controversy is nothing new to this institution; there is a history of debate going right back to 30 June 1860, the year the Museum was founded. The Great Debate is believed to have been the first ever public debate on Charles Darwin’s theory of evolution – certainly the thorny issue of the time.

The debate is now notorious for the clash of ideologies between Samuel Wilberforce, the Bishop of Oxford, and Thomas Henry Huxley, a young biologist known as ‘Darwin’s bulldog’.

Reports from the time are a little sketchy, but tempers are believed to have flared and insults were traded, climaxing with the shocking moment where Wilberforce compared Huxley’s grandparents to an ape. This was obviously outrageous to the delicate Victorian temperament, and people were believed to have fainted with shock!

This short video reveals how we think the debate may have gone (with a little artistic license thrown in):

The anniversary of the Great Debate falls next week, and this year it’s an extra special one. We’re reigniting the tradition of a good lively discussion with The Great Debate: Smart Drugs – Is It Cheating? On Thursday 29 June, Claire Fox of the Institute of Ideas and BBC Radio 4 chairs a multidisciplinary panel as in a debate about the ethics, fairness, and effects of so-called smart drugs and their impact on society.

Smart drugs is a name given to prescription drugs, typically used to treat disorders such as narcolepsy and attention deficit hyperactivity disorder (ADHD), which are now also commonly being used to improve cognitive ability and concentration. Some studies suggest that these drugs are now widely being used by university students, in a climate of increased academic and financial pressure.

Many students are said to see these drugs as a normal aid to study, but some experts have serious concerns about increasing levels of self-prescription and the long-term safety of their use, as well as the impact on competitiveness. Increased use in other areas of society may also have implications. 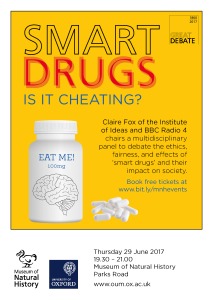 The panel for this debate includes world experts in the fields of neuroethics, evolutionary psychology, and philosophy, each representing different sides of this challenging subject.

Tickets are free, but you need to book your place. We can promise controversial opinions, expert insights and an eye-opening evening, but unlike Wilberforce and Huxley, we can’t necessarily guarantee that the panelists will be flinging insults about each other’s grandparents.