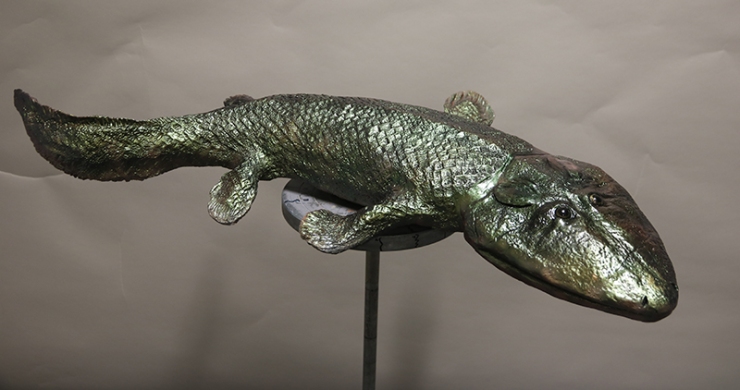 This bizarre creature, somewhere between fish and early four-legged land animals, is called Tiktaalik. The more scientists learn about this 375 million year-old beast, now long extinct, the more it intrigues them. Recent discoveries suggest its strong pelvis and hind limbs allowed it to move effectively through water, but also to clamber on the river bed and possibly onto mud flats.

Education Officers here at the Museum often use Tiktaalik as an example of how animals moved out of water and onto land and how that relates to the history of life on Earth. Until now, this has been a bit of a challenge: our education activities all focus on using specimens, but only a few fossilized bones remain from this ancient animal. Enter Robyn Hill, model maker! Here she explains how she tackled the task of bringing Tiktaalik to life:

For the last 3 years I have been studying model-making at Arts University Bournemouth. For a final year project we were required to find a client and create a model in 7 weeks. One of my fellow students put me in contact with Chris Jarvis, an Education Officer at the Museum of Natural History, who gave me the project. He’s been very supportive and incredibly enthusiastic about the collaboration. The whole experience has been a boost in confidence as this was the first model of this type and scale I had made.

The model will be used as a tool to illustrate the story of the Tiktaalik during schools workshops. The Tiktaalik is important in the evolutionary timeline as it is the cross over between historic fish, such as the Coelacanth, and the first four-legged animals, the tetrapods.

I decided to make the model out of fibreglass as it would withstand more wear and tear, such as being stroked by school children, and it is light enough to be carried by a single person when holding up and demonstrating.

The head was probably the easiest part to model, because I could use the direct evidence from fossil remains. Then it was a case of imagining where the muscles and flesh would lie over the skull. I used written explanations of the creature alongside illustrations to help me create the final look.

When posing Tiktaalik I looked into how much the body would realistically curve. I referred to the fossil remains and animations of how it would have moved, alongside images of preserved footprints. Tiktaalik was one of the first animals with a neck, which is something I hope I illustrated in my design.

The Coelacanth is a living relative of Tiktaalik and has a similar type of scales, so I used images of this animal to help my research. I also looked at fish which live in similar conditions. I was experimental with the paint, as no one is certain what colour its scales would have been. I used changing pigments over a detailing layer of airbrushed cellulose paint.

On the final model, you may see a few scars: some of these I made on purpose, some made by mistake, but I believe it gives the creature more character, because it was a predator and would have had to fight for its place!

3 thoughts on “A model ancestor”