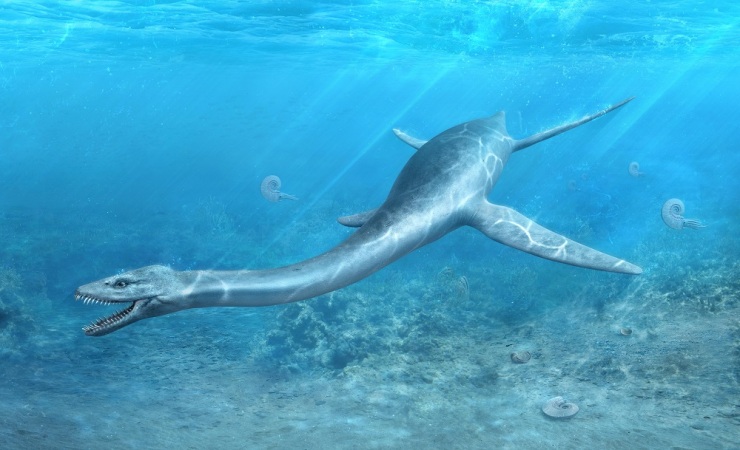 We’ve just opened a brand new, permanent display called Out of the Deep, featuring two beautifully preserved plesiosaur skeletons. Remarkably, both of these marine reptile fossils have skulls, which is more unusual than you might think. Dr Hilary Ketchum, collections manager in the Museum’s Earth Collections and curator of Out of the Deep, describes how the skull of the long-necked plesiosaur made it safely from a quarry to a museum display.

At the bottom of a clay pit in 2014, palaeontologists from the Oxford Clay Working Group discovered a 165-million-year-old fossil plesiosaur skeleton, and they knew they had found something special. Plesiosaur bones are fairly common in the quarry, but skeletons are rare. Skeletons with skulls are rarer still. Fantastically, at the end of their newly-found plesiosaur’s neck was a skull. Barely visible underneath the clay, only the tip of the snout and a few teeth were exposed.

Plesiosaur skulls are usually made up of around 33 bones, not including the tiny bones from inside the eye sockets, called the sclerotic ring. The skull bones are among the smallest and most fragile in the entire skeleton. This means they are much less likely to be preserved, and less likely to be discovered, than the larger and more robust backbones and limb bones.

When the plesiosaur skeleton arrived in the Museum in 2015, the skull and some of the surrounding clay was encased in its protective plaster field jacket. As tempting as it was, instead of cracking open the jacket straight away, we decided on a more technological approach. Professor Roger Benson and Dr James Neenan took the specimen to the Royal Veterinary College to use their enormous CT scanner, normally used for scanning horses and other large animals, and took thousands of X-rays of the jacket. This allowed them to build up a 3D model of the fossil inside – our first tantalising glimpse of the whole skull!

Having the CT scan of the skull was like having a picture on a puzzle box
Juliet Hay, Earth Collections conservator and preparator

Although the CT scan was incredibly useful, we still had to proceed with the preparation with caution. It was possible that not all of the bones had not been detected by the scanner, especially the incredibly thin bones of the palate.

Slowly and carefully, Juliet and I removed the soft clay from around the skull. The weight of clay pressing on top of the skull for millions of years had crushed it, breaking some of the bones into a lot of smaller pieces. In order to keep track of them we attached a number to each piece of bone and photographed it from several different angles before removing it from the jacket.

When all the bones had finally been removed from the clay, we had over 250 pieces. Next came the challenge of the three-dimensional jigsaw!

With knowledge about plesiosaur skulls from my PhD, and some extra expert help from Roger Benson and Dr Mark Evans, Curator of Natural Science and Archaeology, New Walk Museum and Art Gallery, I was able to build up the skull, piece by piece, until it was nearly whole again.

Amazingly, the skull is even more complete and more beautifully preserved than we could tell from the CT scan. The sutures between the individual bones can be seen in exquisite detail, and even though I work with fossils every day, I still find it amazing that it is 165 million years old.

With special thanks to:

Forterra, for generously donating the plesiosaur skeleton to the Museum, after it was discovered in a Forterra quarry.