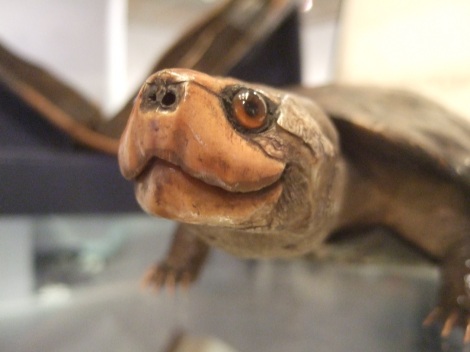 Why’s our black marsh turtle smiling? It’s turtley obvious, he’s a star! He’s having a Christmas holiday at Banbury Museum where he features in our Natural Histories exhibition. He’s joined by other treasures on tour from the University of Oxford, such as a meteorite from outer space as old as the Earth itself, the jaw of a real Oxfordshire dinosaur… and much, much more.

One of the things I like about Banbury Museum is that its entrance is slap bang in the middle of the Castle Quay Shopping Centre, next to the picturesque Oxford canal. It’s really easy to take a break from Christmas shopping and have a look around, and (yes, you’ve guessed it!) admission is turtley free!

Natural Histories is on until 22 February 2014, Mon – Sat: 10am – 5pm but check holiday period opening times on the museum website http://www.cherwell.gov.uk/museum/index.cfm?articleid=5758/.