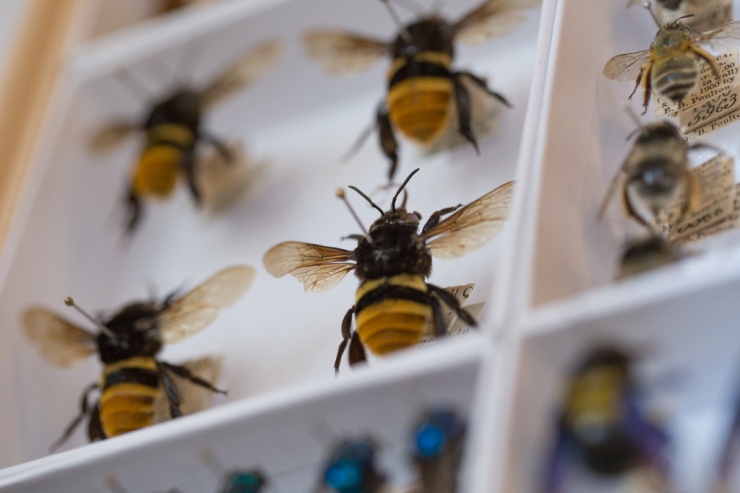 Since the launch of our Kurt Jackson exhibition in March, the Museum has gone a bit bee mad. We’ve had themed events for all different audiences; expert beekeepers sharing their top tips with adults, right through to little ones trying on beekeeping outfits and building a giant beehive. There’s even more coming soon, including a talk by Kurt, the artist himself, on 12th May.

Now the buzz has spread to the Presenting… case, our changing display that shows off real treasures from the collection. The Jackson exhibition focuses on some of the 270 British bees, but this smaller display gives a different perspective, exploring the amazing variety of bees found around the world.

Bees are one of the major groups of insects, numbering about 20,000 described species. Only a very small proportion of bees are the familiar honeybees or bumblebees that we think of first – most species are actually solitary bees. Bees exist in a great diversity of shapes, sizes and colours. In particular the smaller species do not look like bees at all and are often mistaken for small wasps or flies.

Many bees are specialised as pollinators and have evolved together with flowering plants for over 100 million years. In return for pollination services, plants provide nectar, pollen and other substances to bees.

Although most are specialist pollinators, about 10 per cent of bee species are parasites of other bees, taking advantage of the nectar and pollen collected by their host to feed their own young. These parasitic bees can be quite strange in appearance – not needing to collect pollen they have typically lost most of their hair and appear more like wasps.

The Museum has one of the most important bee collections in the world, containing specimens collected over 200 years ago and from many different countries. The star bee specimen, and one of the Museum’s greatest treasures, has to to be Wallace’s Giant Bee (Megachile pluto). This is the first time it has been on open display to the public.

It was captured by the Victorian explorer and naturalist Alfred Russel Wallace in 1859. Only found on the Indonesian island of Bacan and its two neighbouring islands, this giant was believed to be extinct until it was re-discovered in 1981. The massively enlarged mandibles of the female are used for collecting tree resin and excavating tunnels in termite nests. To give an impression of scale, Wallace’s Giant Bee is shown here next to a familiar honeybee (Apis mellifera).

You have just a couple of weeks left to appreciate the wonderful diversity of bees, before it closes on 16th May.

One thought on “Presenting… the wonderful diversity of bees”