In the latest display in our Presenting… series, collections manager Amoret Spooner takes a look at the wonderful and sometimes strange world of the praying mantis.

Praying mantis is the common name given to an order of insects called Mantodea, a word which derives from mantis meaning prophet, and eidos meaning form or type. The more familiar ‘praying mantis’ refers to the striking way that they hold their large forelimbs, in a ‘praying’ posture. 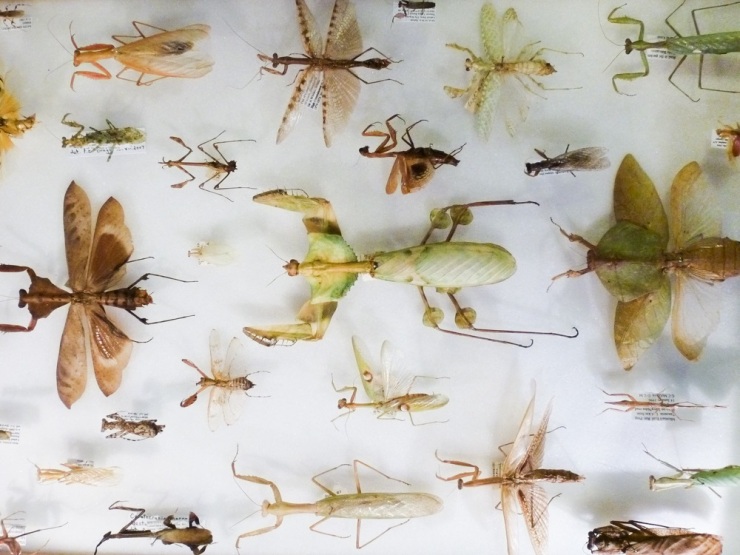 There are over 2,400 species of mantis worldwide, split into 21 different families. The image above shows their incredible diversity of colour, shape and size. But while they may differ in appearance, their biology and many behavioural traits are the same.

Mantis are predators of insects, including other mantis, but larger species will eat small lizards and birds. But they are perhaps best known for being cannibalistic. This behaviour is most commonly seen in nymphs straight out of the egg case, or ootheca, but it can also occur when the female eats the male after mating. However, cannibalism is not required to mate, so when it happens it’s usually because the female is hungry!

Praying mantis are ambush hunters, either camouflaging themselves while waiting for their prey to approach, or actively stalking prey. Their compound eyes are specialised in perceiving motion, and are widely spaced giving them a wide field of vision. Along with powerful front legs and an ability to move the head up to 180°, this makes them successful predators.

The Museum’s archive contains original drawings and annotations by John Obadiah Westwood (1805–1893), the first Hope Professor of Zoology. As a renowned scientist Westwood described many new mantis species, and he was also a talented artist.

The Presenting… Marvellous Mantodea case is on display at the Museum until 1 November 2018.