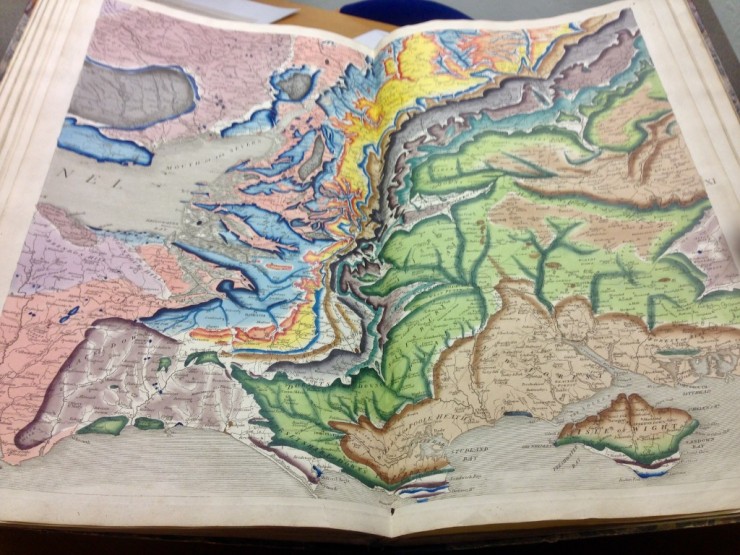 Today is the 250th birthday of the remarkable English geologist William Smith, creator of the first geological map of England and Wales – ‘the map that changed the world’. Here Danielle Czerkaszyn, Senior Archives and Library Assistant, tells us more about Smith’s achievements and his relationship to the Museum.

William Smith (1769-1839) began his career as a land surveyor’s assistant in his home village of Churchill, Oxfordshire. He soon travelled the country working on mining, canal and irrigation projects. This gave him the opportunity to observe the patterns in layers of rock, known as strata, and to recognise that they could be identified by the fossils they contained. This would earn him the name ‘Strata Smith.’

Smith’s observations of strata over hundreds of miles led to the ground-breaking 1815 publication of his map A delineation of strata of England and Wales (pictured top) that ultimately bankrupted him.

Smith’s map set the style for modern geological maps and many of the names and colours he applied to the strata are still used today. While Smith’s accomplishment was undoubtedly remarkable, he was only officially recognised for his discoveries late in life. His lack of formal education and his family’s working class background made him an outcast to most of higher society at the time.

It wasn’t until a few years before he passed away that Smith received any recognition for his contribution to the science of geology, receiving a number of awards, including the prestigious Wollaston Medal from the Geological Society of London in 1831, and an honorary degree from Trinity College Dublin in 1835.

His legacy lived on with his nephew John Phillips, one of our Museum’s founders and Professor of Geology at Oxford. Recognising its importance, Phillips left Smith’s archive to the Museum on his death in 1874. Thanks to generous funding from Arts Council England a few years ago, the Smith collection has been catalogued, digitised and is available online to the public.

Few men in the history of science contributed as much, but are as little known, as William Smith. He was a hardworking and determined man who dedicated his life to understanding the world beneath us. So here’s a big Happy 250th birthday to William Smith – the ‘Father of English Geology.’

A small display, Presenting… William Smith: ‘The Father of English Geology’ 250 years on, is running in the Museum until 2 May 2019.