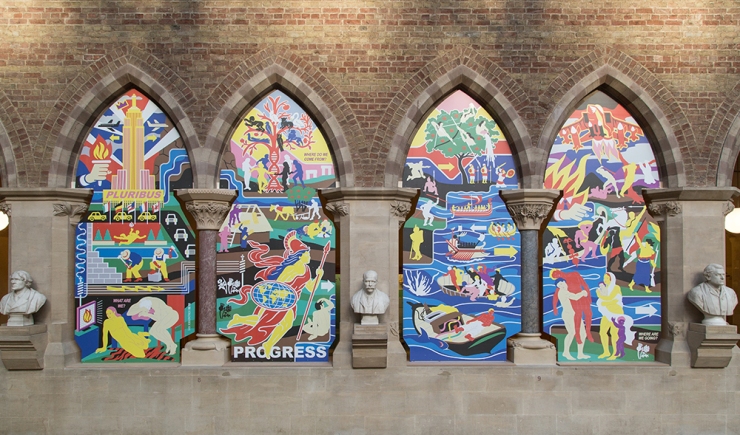 These are some of the big questions asked in our current special exhibition, Settlers. It’s also the title of a new artwork by Ian Kirkpatrick that has just been commissioned by the Museum.

You may remember, back in July we put out a call for artists to respond to the main themes of the upcoming Settlers exhibition. We received an incredible response, with almost 100 proposals, so needless to say we were spoilt for choice! After several rounds of shortlisting, discussion and deliberation, we chose Ian Kirkpatrick, a Canadian artist now based in York.

We were excited by Ian’s bold iconography and references to the history of art and design, while using shapes and colours usually seen on contemporary street signage. His approach to the themes and issues around migration, genetics and settlement were innovative and brave. We also couldn’t wait to see how his work would look in our Victorian neo-Gothic building.

Over a period of four months, Ian researched, planned and created his spectacular final piece Where Do We Come From? What Are We? Where Are We Going? Here he explains a little about his artistic process:

Most of my projects begin with a period of research – often looking at historical events or interesting facts related to the brief. I often sketch out a very rough layout of the design in my notebook, then create the actual artwork directly onto the iPad or computer. Because I use vector-based software, I can easily rearrange or modify graphics – so the design is constantly shifting until the artwork is finished.

Ian created a series of six panels that explores the social and natural causes behind human migration, both in ancient times and in the present day. It presents historical and modern peoples moving across a landscape in response to conflict, climate change and urbanisation, and remixes imagery from classical paintings alongside iconography from Great War postcards, Roman coins and the Bayeux Tapestry.

Of course, in a building like ours, the installation of such a large, bold piece of work would never be easy. Peter Johnson, the Museum’s Building Manager, came up with an ingenious solution to hold the panels into the arches, without damaging the masonry by drilling or glueing.

Hand-cut pieces of plywood were made to snugly fit round the capitals, so that the Dibond aluminium sheets don’t rest on the stone.

So, standing back and looking at the finished piece, looking resplendent in the winter sunshine and attracting the attention of hundreds of museum visitors, how does Ian feel?

The project was a lot of work – but it’s also been very satisfying to see it finally installed. Although the piece initially started as a comment on contemporary British settlement, it evolved into something that explored global migration throughout all of history.  Trying to find a way to tackle a theme that big, while still remaining visually coherent, is quite tricky!  But I was really pleased with the results and love seeing the finished piece housed within the magnificent neo-Gothic architecture of the Museum!

One thought on “Where Do We Come From? What Are We? Where Are We Going?”