A Spotlight Specimens special for Oxford Festival of Nature

I feel myself very lucky to have a job that involves working with the fossil remains of long-extinct animals. One of the things my colleagues and I are currently working on is a plesiosaur – a marine reptile that lived in the sea millions of years ago.

This particular specimen was found in a clay pit near Peterborough by members of the Oxford Clay Working Group in 2014, and is a near-complete example of its kind. The palaeontologists who found the specimen named it Eve, although we don’t know if it was male or female, and perhaps never will.

The discovery of large fossil vertebrates like this is rare, so we are fortunate to have had the specimen donated to the Museum by the quarry owners Forterra. 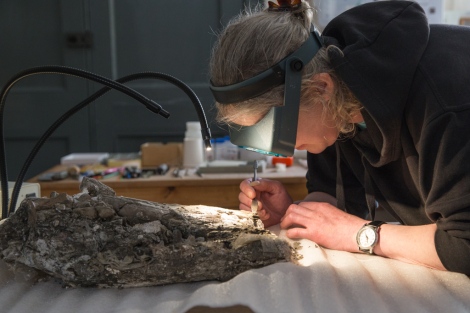 Juliet at work on the plesiosaur skull

The plesiosaur is 165 million years old and, when alive, was around 5.5 metres long. It had a long neck, a barrel-shaped body, four flippers and a short tail. The find is particularly exciting as the skull was also discovered. It is encased in a clay matrix, which is relatively easy to remove, but the work has to be carried out under magnifying lenses and microscopes.

As the skull is quite small relative to the size of the body, the features are very delicate and it is a painstaking process to remove the sediment without damaging the fossil bone or losing any tiny fragments. Fortunately, pictures of the skull have been produced using CT scanning technology, and the images are proving invaluable as an aid to assist in its preparation. It’s a bit like having a jigsaw puzzle with the picture on the lid to refer to!

A belemnite hooklet at 12x magnification, found with the plesiosaur remains and possibly part of Eve’s last meal

The clay covering the skull is being sieved and examined and tiny hook-shaped fossils have been found. These came from the arms of squid-like creatures called belemnites, which may have formed a large part of the plesiosaur’s diet.

It is too early to say for sure, but Eve could represent a species new to science, as some features, such as the shape of the flipper bones and some of the surfaces of the bone in the skull, are quite unusual. Further research needs to be done before the findings can be published in scientific journals – watch this space.

And if you’re visiting the Museum before 25 July, you can see some of the fossilised remains of Eve for yourself, in our Presenting… display case.

One response to “A plesiosaur named Eve”